Updated with quotes from CEO

Hyundai Motor Co. Thursday reported a 92 percent gain in operating income from pandemic-hit year-ago period and 32 percent against the previous quarter when it reflected recall cost for battery defects in the first three months as it benefited from faster-than-expected demand pickup in the United States and Europe, its key market for premium brands.

Sales came to 27.39 trillion won, falling from the previous quarter, but up 8.2 percent on year.

“The path in the second quarter and onwards is expected to be bumpy due to chip, foreign exchange and Covid-19 headwinds,” said Chang Jae-hoon, Hyundai Motor CEO, told the Maeil Business Newspaper in an exclusive interview timed with the first-quarter earnings release.

“How well we manage our supply network through product competitiveness and how agile we respond (to the challenges” would become crucial,” said Chang who came to head the country’s top carmaker in December last year.

Given the uncertainties, the carmaker will keep investment conservative.

“For now, we should focus on what we do well than seeking new investments,” he said.

The unprecedented pandemic crisis has made the company to act more responsively to changes, he added.

He expressed confidence in a turning point in the Chinese market through luxury marque Genesis launch by cutting out a new image in automation, premium and hydrogen strength. 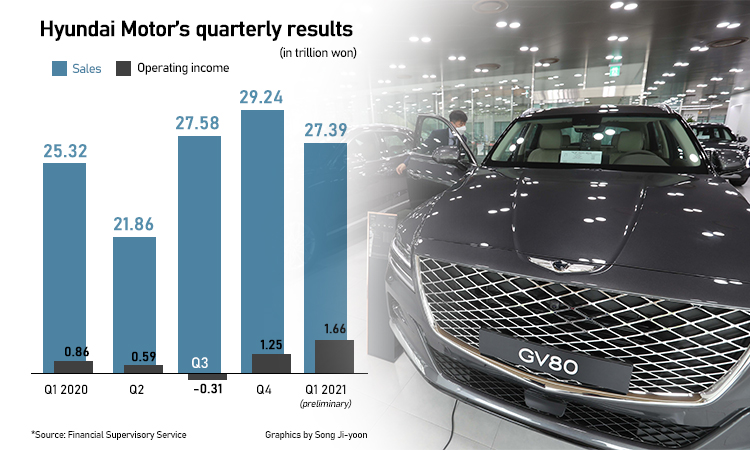 이미지 확대
Operation margin in the first quarter improved by 2.6 percentage points to 6 percent on increased sale of high-end vehicles.

The carmaker sold a total of 1,000,281 units in the January-March period in Korea and overseas, up 10.7 percent from a year ago. Domestic sales grew 16.6 percent on year to 185,413 units, driven by new model launches such as Tucson and GV70. Overseas sales gained 9.5 percent in the same period.

SUVs accounted for 44.3 percent of sales, up by 1.4 percentage points from a year ago. Premium Genesis models also increased their portion from 1.8 percent to 4.3 percent in the period.

The outlook for the carmaker’s second quarter and beyond is mixed. Global demand is recovering thanks to stimulus efforts in many countries, but the ongoing shortage of automotive semiconductor parts may disrupt production of some car models in the second quarter.

Hyundai Motor already suspended part of its assembly lines to address part supply problems in the first quarter. There are other headwinds such as another surge of coronavirus cases in India and Latin America, the strong growth driver in the first quarter, as well as foreign currency fluctuations and a rise in raw materials.

Hyundai Motor said it will respond to external challenges through the use of alternative parts, inventory control and production flexibility, while continuing efforts to improve profitability and competitiveness by focusing marketing resources on key new models including Tucson, GV70, and Ioniq 5.

The carmaker said it will make a full start of Ioniq 5 built on its proprietary EV platform E-GMP in the first half in Europe and in the second half in the United States, while expanding its lineup of green cars by kicking off sales of Santa Fe hybrid electric and plug-in hybrid electric vehicles across Europe.

By Seo Dong-cheol and Minu Kim