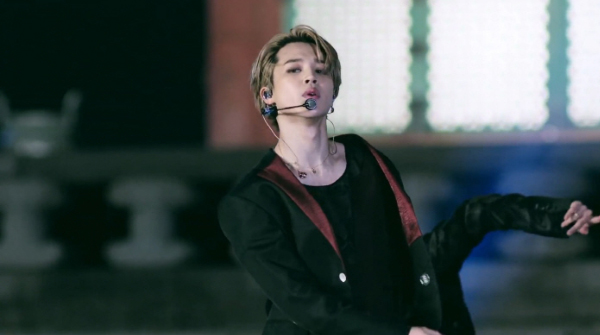 Korean auction house Myart Auction asked the designer Kim Rieul to put the outfit up for auction to promote its first online event.

Jimin wore the men’s traditional hanbok during the nighttime performance pre-recorded in Seoul for the opening stage of “BTS Week” special on NBC’s The Tonight Show Starring Jimmy Fallon in September last year.

The septet in an interview with fashion magazine Cosmopolitan in December selected hanbok as their favorite look ever worn in concert, explaining it as Korean traditional attire and “Korean culture” as well as praising it to be extremely comfortable.

The auction will begin at 10:00 a.m. this Thursday and end a week later. The bidding price for Jimin’s hanbok starts at 5 million won ($4,470). Others to be auctioned off include a drawing by Park Soo-keun and a painting by Chun Kyung-ja.

BTS’ outfits and other goods recently have become top sellers at a series of auctions.

The Love Yourself world tour microphones sold for eight times its original estimated value, raking in $83,200 at a charity auction hosted by Julien’s Auctions in January 2020. The pastel-colored Dynamite music video outfits also sold for a total of $162,500 at another auction early this year, eight times the amount expected earlier.

By Jeon Ji-hyun and Lee Ha-yeon