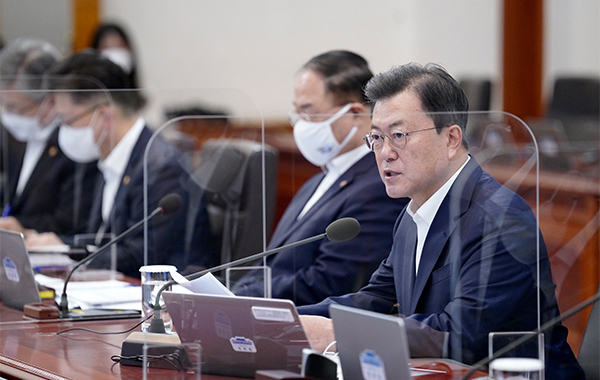 The South Korean government joined others fighting to uphold semiconductor supremacy or sovereignty amid chip shortage in the age of automation, digitalization and electrification.

The Ministry of Trade, Industry and Energy on Thursday briefed President Moon Jae-in on a package of stimuli measures to back the chip segment responsible for 20 percent of the country’s exports.

It will separately unveil outline to back EV battery business within the first half.

The meeting was attended by business executives including Lee Jung-bae, chief of memory business at Samsung Electronics, and Lee Seok-hee, chief executive of SK hynix. It is the first time for Moon to call for the meeting after December 2019. It is also considered rare for executives, not from business lobby groups, to participate in person.

The Blue House meeting comes as other state heads go all-out to promote chip industry amid global shortage. The latest being U.S. President Joe Biden in his videoconference of IT, car and chip products holding up a wafer in his hand to call out “This is infrastructure” and promise $50 billion stimuli for chip production and research.

“[The government] will provide all the support so that Korea is able to maintain top position in semiconductors and widen gap with others,” Moon said. 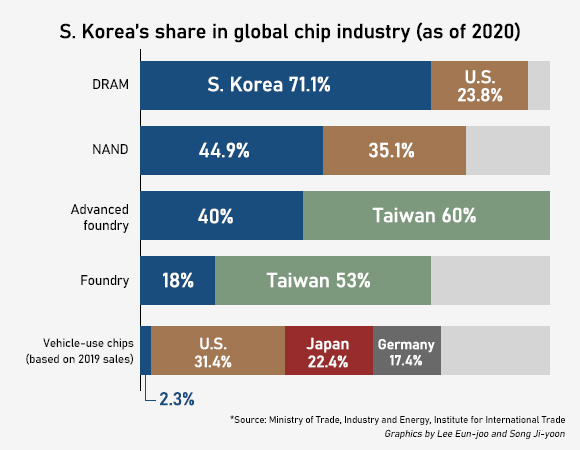 이미지 확대
Under the plan, Korea will establish its own semiconductor cluster to counter set up of self-contained semiconductor supply network by major countries. It plans to create clusters by key value chain like the exclusive complex for materials, components, and equipment, in Yongin, Gyeonggi Province. It will also ease regulations so that companies are able to expand chip production capacity. It also plans to offer tax benefits on key technology investments with high technology and economic value such as advanced semiconductors and provide more funding.

The move comes after the semiconductor industry had earlier asked the government to allow up to 50 percent tax exemption on research and development and manufacturing facility investment costs to provide a leveling field with other global players.

Korea will also boost technology development of vehicle-use semiconductors and respond to supply shortage based on ties between future vehicle and semiconductor industries. 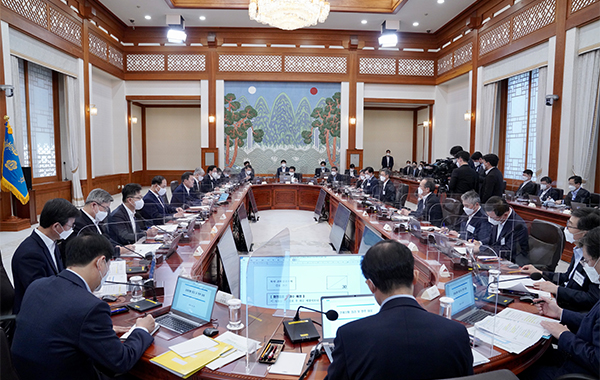 Comprehensive measures will be announced in the first half of this year.

Finance minister Hong Nam-ki said on Friday that the government will significantly up budget to support auto chip sector and look for items that can be commercialized in the short term to tackle supply issues.

Also part of the measures are plans to widen the technology gap in next-generation secondary battery development to secure battery competitiveness in the auto sector.

Korea will come up with measures to nurture professional battery workforce and prevent outflow of resources. It also plans to create a specialized fund to support growth of small and mid-size firms in battery sector. It will also support about 9,000 car component manufacturers shift engagement to future vehicle technology.

The government will make sure that shipbuilders are able to maintain workforce in the latter half of next year when delivery begins.