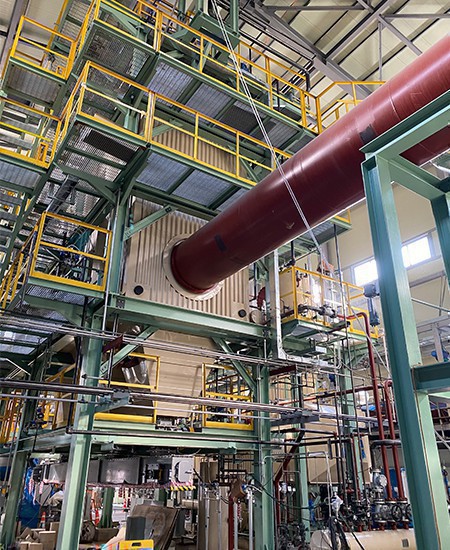 The world’s first microwave-driven plasma gasification will be up and running in Korea from April, turning wood pellets, waste vinyl and plastics into energy.

The gasification power plant that uses cost-effective microwave plasma torch technology will not only solve the headache of waste going to landfill, but also produce hydrogen as a by-product that can be used for hydrogen-powered vehicles and other industrial purposes, according to Lee Bong-joo, head of Green Science, a Korean renewable energy startup.

Plasma often called “the fourth state of matter,” distinct from the solid, liquid, and gaseous states, refers to a state where electrons are separated from each other when the vapor meets heat at temperatures of thousands of degrees. But the conventional plasma arc torch method for waste incineration requires excessive power to get the plasma temperature and its expensive metal electrode needs to be replaced periodically.

In contrast, the microwave plasma torch developed by Green Science uses microwaves to create plasma, which requires less power and does not require a metal electrode, so there is no maintenance cost, Lee said.

The volume of flames exceeding 2,000 Celsius degrees is 50 times that of arc plasma, enabling more efficient power management and complete burning of hazardous substances such as dioxins, which may occur during combustion, while hydrogen can be produced in parallel.

The plasma arc torch method has been used to incinerate waste in several countries, but its use remains limited due to low economic efficiency, Lee said, adding the microwave torch technology is at least 10 times more efficient than the conventional technology.

By Ahn Byung-joon and Minu Kim