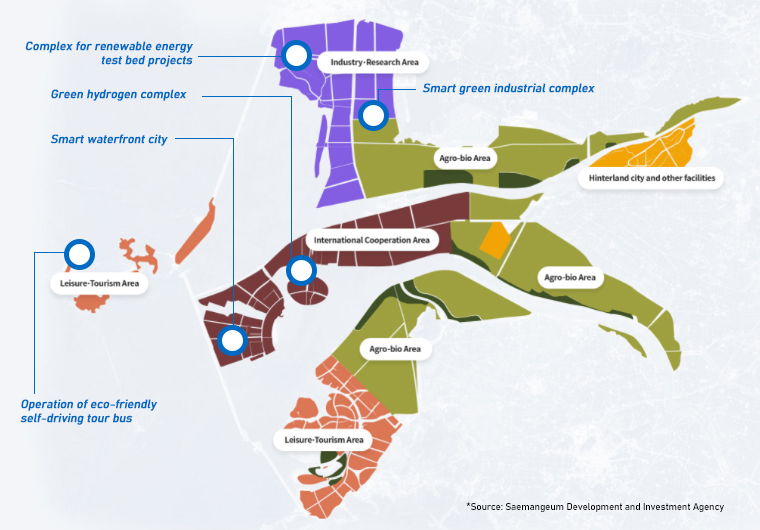 이미지 확대
The South Korean government will build large-scale eco-friendly hydrogen production facilities in Saemangeum, a reclaimed area located about 280 kilometers southwest of Seoul, making it a frontline for the Green New Deal initiative designed to change the fundamental mechanism of the coal-centered traditional industry.

The government also plans to transform the site, which is already being constructed as the country’s single largest 7GW renewable energy complex, into a RE100 smart green industrial complex that relies on 100 percent renewable energy sources. It aims to host world-class large data centers to link companies across Asia, according to the government’s Saemangeum Green + Digital New Deal blueprint unveiled Wednesday.

The gist of the plan is to use Saemangeum as a test bed for the government’s strategy to implement the Korean New Deal and carbon neutrality by 2050. Saemangeum is an ideal place for the initiative as it is adjacent to industrial clusters and harbor cities with large renewable energy sites.

According to the plan, the government will build a green hydrogen production cluster by 2027 in Saemangeum with a water electrolysis facility capable of producing 15,000 tons of hydrogen per year. A joint research project involving private companies such as Hyundai Motor and LG Electronics will be carried out to validate the economic feasibility of green hydrogen projects and enhance technology capabilities.

The government also shared more details on its previous plan to build a 7GW renewable energy complex in Saemangeum which gradually deliver grid-scale power through onshore and offshore wind and solar photovoltaic projects by 2030. The projects, if completed, are expected to create about 220,000 new jobs.

The government will build the country`s first smart green national pilot industrial complex in Saemangeum, a project designed to reduce carbon emissions by more than 25 percent compared to existing industrial complex projects by integrating the latest technologies such as intelligent power grids for renewable energy supply and smart logistics and transportation.

The area also hopes to become data hotspot by installing 16 large-scale data centers. Of these, `RE100 Data Center`, into which SK plans to invest about 2 trillion won ($1.79 billion), is expected to create more than 15,000 jobs. The government plans to foster the data centers as an overseas information exchange gateway by connecting them to 10 cities in seven major Asian countries through submarine optical communication cables. The government will also make efforts to attract global companies such as Facebook, Amazon, Apple, Netflix, and Google to the data center site.