The Korean government doled out 11.85 trillion won ($10.8 billion) in job search allowances in 2020, breaking the previous record of 8.09 trillion won in 2019 by almost 50 percent, according to the data from the Ministry of Employment and Labor on Monday. In December alone, the payout reached 956.6 billion won.

The ministry attributed the sharp increase to the massive job losses amid the Covid-19 outbreak and the government’s expansion of employment insurance coverage. 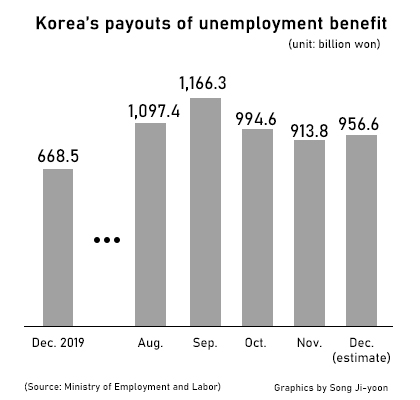 이미지 확대
The number of people covered by the employment insurance reached 14.08 million, up 239,000 or 1.7 percent from a year earlier.

The monthly gain had stayed above 300,000 from September to November, but fell below the level last month.

The number of workers covered by the employment insurance in the manufacturing industry, the backbone of the Korean economy, edged down 0.6 percent from a year ago to 3.55 million last month. The number has decreased for 16 straight months since September 2019, but the monthly drop has slowed down since July last year.

The number of service sector workers subscribed to the state insurance rose 2.6 percent on year to 9.67 million in December. The number for the hospitality and restaurant industry, one of the hardest-hit sectors by the virus outbreak, fell sharply by 34,000.

On the other hand, the non-store retail industry added 21,000 more to the number of state-insured workers on booming demand for online shopping.