Thirty-something men are the primary force behind the crypto fad in Korea, a study found.

According to cryptocurrency exchange platform Coinone on Monday, the age group of 30s accounted for 39 percent of daily trade of Bitcoin and other virtual currencies across January and February. They were followed by 40s with 17.3 percent, 50s 12 percent, 60s 17.8 percent, 70s 12 percent, and 20s 1.9 percent. The analysis is based on 1.3 million Coinone members.

The age group of over 60s accounted for nearly 30 percent to suggest retirees have turned to the risky asset for higher returns in protracted low interest environment.

Men were generally more enthusiastic about the exotic asset as they were behind 89 percent of daily turnover, eight times more than 11 percent of women. 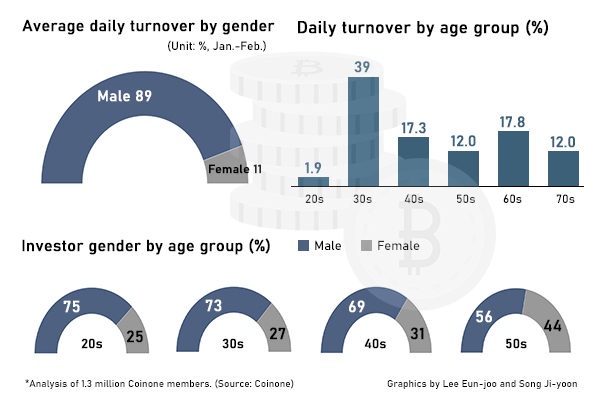 이미지 확대
Men are more swayed by the news and trends on the social media, the exchange noted.

Women in older age group were relatively active in virtual currency engagement. Among investors in their 20s, 75 percent were men and 25 percent women. The share among women went up to 27 percent among 30s, 31 percent in 40s, and 44 percent in 50s.

Coinone found women in their 40s are more exposed to information about virtual asset investment methods in their social groups than women in younger age groups.

By Han Sang-heon and Lee Eun-joo