이미지 확대
Shares of Kurly Inc., operator of South Korea’s online door-to-door grocery service provider Market Kurly, have soared in the over-the-counter market after last week’s news that it eyes an initial public offering in the United States this year in hopes of repeating the success of Korean e-commerce giant Coupang.

Seoul Exchange is the only platform where unlisted Kurly shares are traded.

Kurly shares are expected to head north further as appetite for the stock is insatiable, with some proposing up to 70,000 won, up 25 percent from March 11.

Investors’ bullish bet on the stock is mainly driven by the overall strong demand for local e-commerce service providers after the successful debut of Coupang on the New York Stock Exchange last week.

As of Thursday, local time, the opening price of Coupang stock was $63.5, nearly double from the IPO price. On the following day, shares closed at $48.02. The company’s market cap was the third-highest in the country at 94.5 trillion won.

Investors expect that Kurly shares would also make a successful debut in the U.S. market with much fanfare. In an interview with the Wall Street Journal (WSJ) on Thursday, Market Kurly CEO and founder Sophie Kim said the company is reviewing going public before the end of this year. Founded in 2014, the company is valued roughly 1 trillion won. 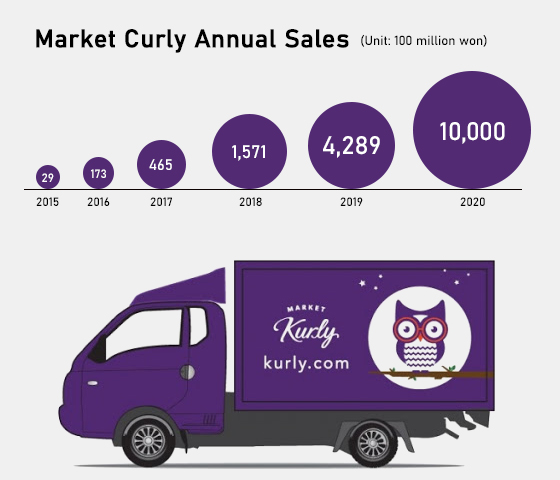 Retail industry insiders noted that the repurchase rate of new Market Kurly customers is more than double that of retail industry average of 28.8 percent at 65.2 percent as of August last year. It also has stronger brand power than Coupang in the fresh food morning delivery market in Korea.

The IPO success of Coupang also has lifted expectations for the upcoming preliminary tenders for the Korean unit of global e-commerce giant eBay Inc. on Tuesday. Investment banks are known to have sent out investment letters to potential buyers including Shinsegae Group, Lotte Group, MBK Partners, and Kakao.

By Kang In-seon and Lee Eun-joo