이미지 확대
South Korea extended its current account surplus for the seventh straight month in November last year, pushing the black 25 percent fatter than a year ago, amid recovery in the latter half.

Asia’s fourth-largest economy posted a current account surplus of $8.97 billion in November 2020, down from three-year high of $11.66 billion in the previous month but up 50.3 percent against a year-ago, the Bank of Korea announced Friday.

The goods surplus in November rose to $9.54 billion from $2.15 billion a year earlier.

Exports gained 1.1 percent on year to $47.02 billion on increased demand for semiconductors, IT devices and automobiles, while imports lost 4.2 percent to $37.48 billion due to low import prices of crude and gas. 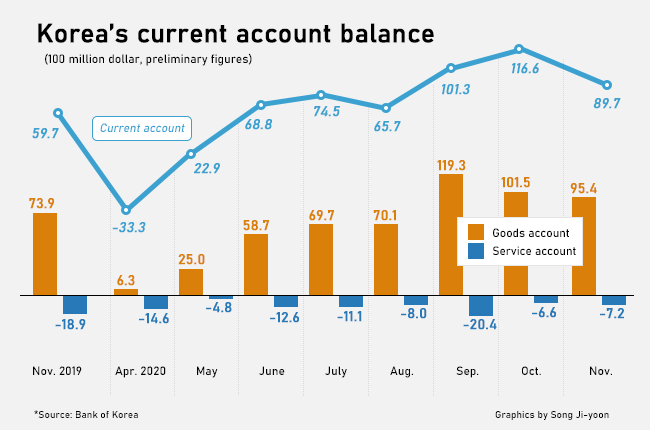 이미지 확대
The service account registered a deficit of $702 million, but the red figure narrowed by $1.17 million from the previous year. Travel account deficit shrank by $450 million as outbound travelers plunged 96 percent amid a standstill in air travel from the Covid-19 pandemic.

The primary income account, which tracks wages of foreign workers and dividend payments overseas, recorded a surplus of $420 million, halved from a year ago due to decreased dividend income.

The capital and financial account, which covers cross-border investments, saw a net inflow of $8.95 billion in November versus $15.94 billion a month earlier.

Direct investment of Koreans overseas expanded $3.33 billion, while that of foreigners at home climbed $1.33 billion. In case of securities investment, Koreans saw the biggest gain of $9.41 billion since July 2019, and foreigners $4.32 billion.