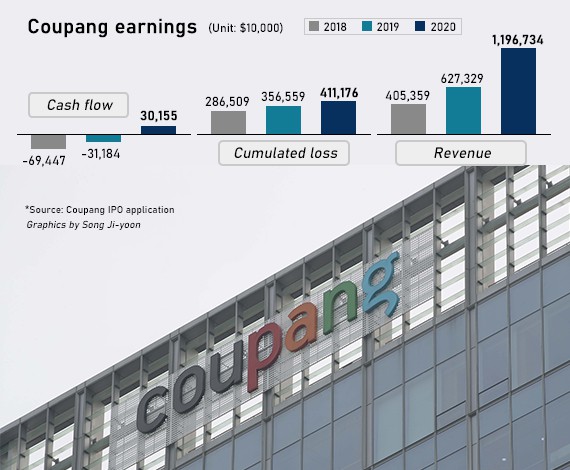 이미지 확대
Coupang Inc. is set to become the third most valuable South Korean business name only after memory giants Samsung Electronics Co. and SK hynix Co. upon pricing its IPO on the New York Stock Exchange at $35, beyond target after scale-up in the offering, to put its market value at about $60 billion.

The first Korean ecommerce name on the Wall Street raised $4.2 billion from the IPO upon pricing 120 million offering beyond the target range of $32 to $34, which was boosted from earlier guidance of $27 to $30, in red-hot demand.

Upong listing on the NYSE under the symbol of CPNG, its market value would be about $60 billion, bigger than Kospi No. 3 LG Chem Ltd. with market cap at 66.5 trillion won ($58.5 billion) as of Thursday.

According to Bloomberg, Coupang made the biggest IPO on the U.S. exchange since Uber Technologies’ IPO of $8.1 billion and the largest Asian name after Alibaba Group Holdings Ltd.’s $25 billion listing in 2014.

The avid appetite for an unfamiliar Korean name whose business is centered in Korea for now has stoked excitement for related stocks and other e-commerce players in Korea.

Coupang’s IPO spectacular spilled over to its business partners.

KEC Holdings, the parent of KEC Device known to be in charge of constructing Coupang’s distribution center, surged 29.61 percent as of 12:51 p.m. on Thursday to 1,335 won in Seoul. BK Tops, the provider of packaging materials to Coupang, jumped 14.68 percent to 12,500 won. Dongbang Transport & Logistics that signed an exclusive shipping contract with Coupang also gained 0.6 percent to 10,000 won. 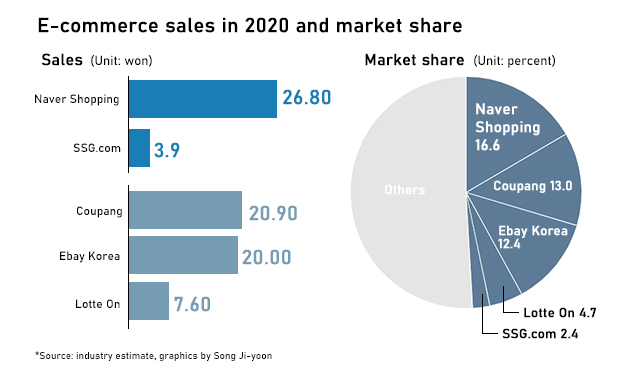 이미지 확대
Coupang takes up 13 percent in the local online shopping market, following its bigger competitor Naver that commands 17 percent. eBay Korea accounts for about 12 percent. Its IPO is expected to accelerate strategic alliances of its rivals such as Naver and Shinsegae Group seeking to join forces to compete against Coupang in the rapidly growing e-commerce market.

Founded in 2010 by Harvard University dropout Kim Bom-suk, Coupang has grown to a dominant player thanks to its super-fast delivery system possible from within hours, overnight or same-day or minimum next day around the year due to warehouse centers located within miles across the nation.

It had 14.8 million active customers as of the fourth quarter 2020, and revenue per active customer averaged $256, up 59.0 percent from a year earlier.

Coupang saw its revenue jump 91 percent from the previous year to $12 billion, according to its IPO filing. Its losses narrowed from $770.2 million in 2019 to $567.6 million last year as sales have grown sharply during the Covid-19 pandemic as customers are doing more online shopping to avoid virus infection.

It has been fast expanding business to food delivery and video streaming to turn into comprehensive platform operator.