OECD ups outlook for Korea, naming it amongst a few in pre-pandemic growth pace 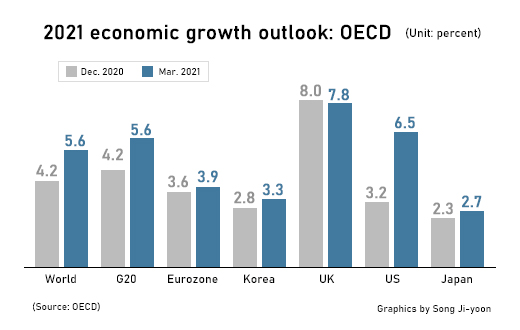 이미지 확대
The Organization for Economic Cooperation and Development (OECD) like other foreign institutions turned more buoyant about the pace of recovery in the South Korean economy, upping this year’s growth outlook to 3.3 percent from 2.8 percent, citing stronger-than-expected global demand boding well for the export-reliant economy.

In the Interim Economic Outlook released Tuesday, the OECD included Asia’s fourth-largest economy in the select group of four whose growth pace would return to pre-pandemic levels along with the U.S., Turkey, and Australia.

The upgrade from December projection follows similar moves by private banks, while public organizations have yet to revisit their earlier forecasts. The International Monetary Fund estimated the Korean economy to expand 3.1 percent while the Bank of Korea projected 3.0 percent. The Korean government forecast a 3.2 percent growth.

The OECD cited the country’s solid exports on robust shipments of chips and automobiles and its effective containing of the economic impact of the pandemic through strong government fiscal support and measures to slow the spread of the coronavirus.

Global trade is forecast to regain life this year as the global economy is projected to grow at a faster pace this year fueled by accelerated roll-outs of vaccinations and aggressive fiscal stimuli in major economies, the OECD said. It expected the world’s No. 1 U.S. economy would grow 6.5 percent this year, 3.3 percentage points higher than its previous forecast, with the world on average gaining 5.6 percent to return to pre-pandemic growth pace by mid-2021.

By Yang Yeon-ho and Lee Soo-min