이미지 확대
South Korean chip making giants may revisit the 2017-2018 memory boom cycle for a longer period, with some predicting the boon to last until 2025, given the sprawling demand for memory from handheld devices to vehicles, factories and data-based economy.

The DRAMeXchange index (DXI) hit a fresh high of 33,748.46 on Feb.26, up 3.26 percent from the previous day, according to the Taiwanese market tracker DRAMeXchange. DXI, a gauge for DRAM memory chip industry’s outlook, has been on upward spiral since 16,898 low in August last year.

Based on the outlook, NAND flash memory prices are expected to start rebounding from the second quarter.

Market watchers bet that the new DRAM boom cycle would continue for a longer period of time than three years ago because of the surging demand for IT devices amid Covid-19. The conservative capex of the world’s three biggest memory chip makers – Samsung Electronics, SK Hynix and Micron also signals a long-stretched super cycle. 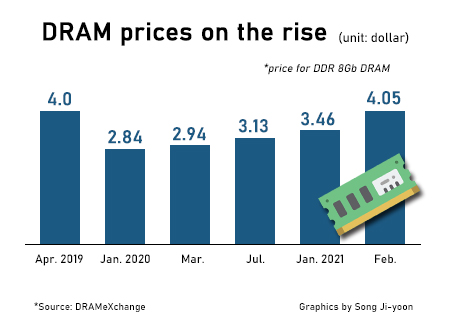 DRAMeXchange’s parent company TrendForce predicted in its latest report that server DRAM prices would rise 10 percent to 15 percent in the second quarter and 40 percent by the end of this year. It was an upward revision from its previous estimation of 8 percent to 13 percent price hikes for the second quarter.

NAND flash memory prices are also expected to pick up as early as the first quarter or in the latter half at the latest, industry watchers believe. Han Jin-man, senior vice president at Samsung Electronics’ memory business division, said at the company’s investors’ forum last year that DRAM demand is projected to increase 10 percent to 20 percent in 2021 compared to the previous year and NAND flash 30 percent to 35 percent.