Samsung Electronics Co. may increase outsourcings some of general-purpose computer chips to Taiwan-based UMC and California-based GlobalFoundaries as it runs out of space at its own foundries due to explosive demand.

According to industry sources on Thursday, Samsung Electronics’ in-house system LSI division recently agreed to source its CMOS image sensors for smartphone cameras from UMC. Outsourcing of semiconductors is unusual to the world’s No. 1 memory chip maker, which launched its own foundry business in the mid-2000s. UMC will soon mass produce chips using 28nm process technology for Samsung Electronics.

An industry source said Samsung Electronics began to respond to a shortage of semiconductor facilities late last year by starting a collaboration with UMC, and the South Korean chip giant will increase outsourcing for general-purpose semiconductors such as display driver integrated circuits mounted on TVs.

The company may also enter a consignment agreement with GlobalFoundries, a foundry spun off from U.S. chipmaker Advanced Micro Devices who once worked with Samsung Electronics in 2014 on the transfer of 14nm process technology. 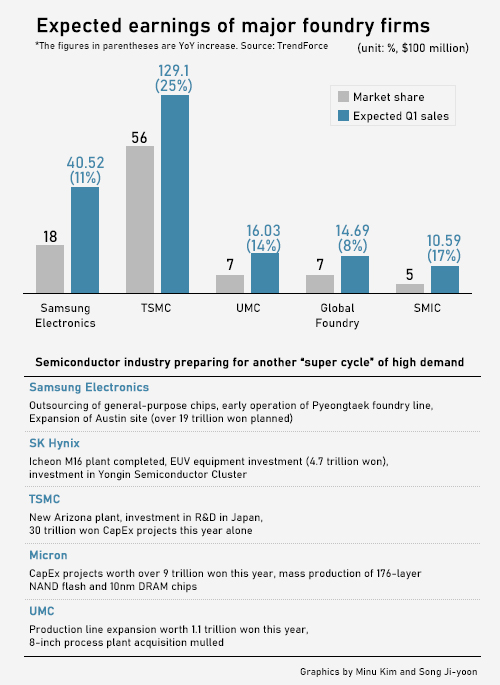 이미지 확대
Another industry source said Samsung Electronics may leave a considerable part of its general-purpose semiconductors to other external companies that could include Taiwan’s TSMC, the world’s No. 1 foundry company.

Amid the supply shortage, the Korean semiconductor industry is also rushing to carry out massive facility investment projects to prepare for another super-cycle in the market.

Samsung Electronics is considering Austin, Texas, as one of the sites for a new $17 billion 3-nm chip plant. SK Hynix recently completed a new production line at Icheon, Gyeonggi, where new 10nm DRAM chips will be rolled out using EUV light exposure equipment from ASML.

A shortage of semiconductors is delaying production lines at global car manufacturers and game console makers among others as the shift to working from home has created a surge in demand for electronics.