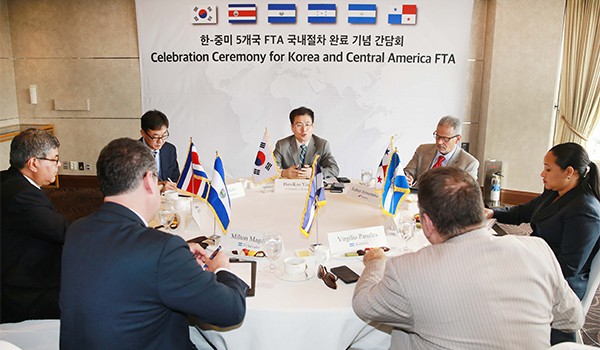 [Photo by The Ministry of Trade, Industry and Energy]

According to the Ministry of Trade, Industry and Energy on Thursday, South Korea’s FTA with the five Central American countries—El Salvador, Nicaragua, Costa Rica, Honduras and Panama —becomes effective from March 1.

The pact partly went into effect with Honduras, Nicaragua, and Costa Rica in 2019, followed by El Salvador last year. Panama is the last country to ratify it.

Korea beats its Asian rivals China and Japan to forge a tariff-free pass in the region.

The trade pact will also serve as a bridge connecting the FTA networks built in North and South America, the ministry said.

Korea has a number of FTAs with major economies in the Americas, including the U.S., Canada, Chile, Peru, and Colombia.

The FTA deal with Central America eliminates duties on 95 percent of traded goods and services in both sides – including Korea’s mainstay export items like automobiles and steels, as well as cosmetics, medicines, fibers, and auto parts.

Panama removes tariffs on 99.3 percent of goods. The country will also immediately remove its tariffs of 10 percent on Korean aloe drinks, which take up 90 percent of Korea’s exports to Panama. Korea already is No. 2 supplier of aloe drinks.

Furthermore, the deal will provide Korean companies in energy, infrastructure and construction fields with more opportunities to participate in major projects procured by the Central American governments.

“Korea is the fifth-largest user of the Panama Canal and the logistics depots in Panama will help facilitate its trade with neighboring countries,” an official from the trade ministry said.