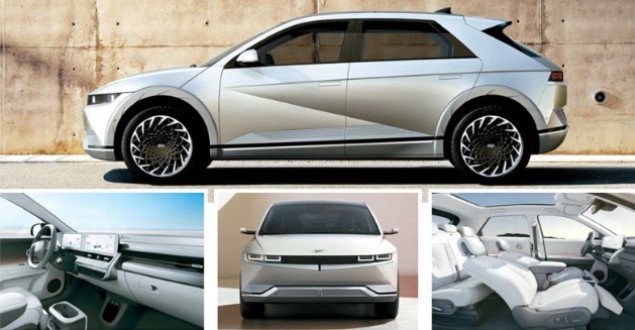 South Korea’s Hyundai Motor Co. has hit the gas pedal on its EV drive by launching Ionic 5, its first fully electric car running on its ambitious modular platform, with shipment goal of 70,000 units for the maiden year and 100,000 units from next year.

Hyundai Motor on Tuesday premiered Ioniq 5, the first model running on its EV-only electric-global modular platform (E-GMP), through its YouTube channel, HyundaiWorldwide. The automaker will receive pre-orders in Korea from Thursday.

“We plan to sell 26,500 units of the Ioniq 5 at home this year,” said Yoo Won-ha, head of domestic business at Hyundai Motor, in an online press conference.

Chang Jae-hoon, president and chief executive of Hyundai Motor, added that it will aim to sell 70,000 units in total globally this year and 100,000 units next year.

To help bolster sales of the Ioniq 5, it will invest in building EV infrastructure across the nation.

The Korean auto giant will begin production of the Ioniq 5 bound for the European and home markets at its Ulsan plant next month, Chang said. The car sale will begin in April in Korea and in the second half in the United States.

The design, in particular, brings back Pony, Hyundai’s first self-made model released in 1974.

“Like Pony had opened the market for Korean cars, we are hoping the Ioniq 5 ushers Korean foray in all-EV vehicle market,” said Lee Sang-yup, head of design at Hyundai Motor.

The vehicle’s side mirrors are loaded with a digital camera to show the driver views to the left and right on internal screen, which enhances driving safety. A movable console on the driver’s side seat can slide back as much as 140 millimeters, allowing more interior space.

The Ioniq 5 has a wheelbase of 3,000 millimeters, which is longer than Hyundai Motor’s biggest sport utility vehicle Palisade.

Performance-wise, the vehicle can drive up to 430 kilometers on a single charge based on long-range rear-wheel drive model. The Ioniq 5 comes in two battery pack options – the long range with 58 kilowatt-hour (kWh) battery and standard with 58.0kWh battery.

Consumers will be able to charge 80 percent of the car battery in 18 minutes with a high-speed 350-kW charger. They will also need to charge the vehicle for only five minutes to get up to 100 kilometers of driving range.

The all-electric car is priced between 50 million won ($45,100) and 55 million won depending on model ranges. The price is expected to go down further to under 40 million won for the long-range exclusive trim model with government subsidies.