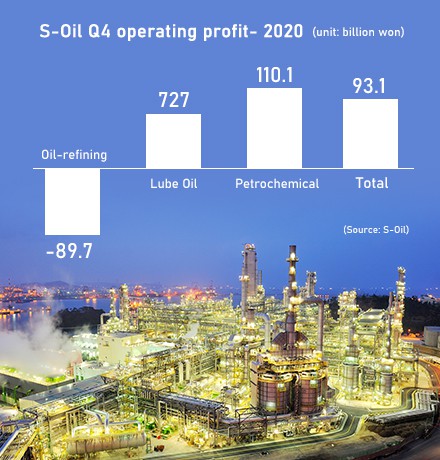 이미지 확대
S-Oil Corp. wholly owned by Saudi Aramco was the only refiner in Korea to turn out a profit in the final quarter last year thanks to its business portfolio with greater focus on high-end petrochemical business.

The petroleum and refinery company said in a regulatory filing on Sunday that its operating profit reached 93.1 billion won ($84.2 million) for the October-December period, reversing from a loss of 9.25 billion won three months ago and surging 880.5 percent from a year earlier.

S-Oil finished its regular maintenance works at the petrochemical facilities in the third quarter of last year, and its production lines became fully operational from the fourth quarter.

Using the upgraded facilities, S-Oil has accelerated production of mainstay products, PP and PO, in the final quarter on expectations for a recovery in global demand for olefin items driven by stimuli actions from various countries to fight against the pandemic slowdown. The company now expects a further growth this year, buoyed by a recovery in refining margins on rising demand for petroleum products as well as strong sales of chemical goods with the arrival of virus vaccines.

S-Oil this year will resume its phase 2 Shaheen project this year to construct a mixed-feed cracker to produce olefins with capacity of 1.5 million tons of ethylene and other petrochemical raw materials per year. It will kick off basic design of the project in the latter half of this year and make the final investment decision by the second half of next year.