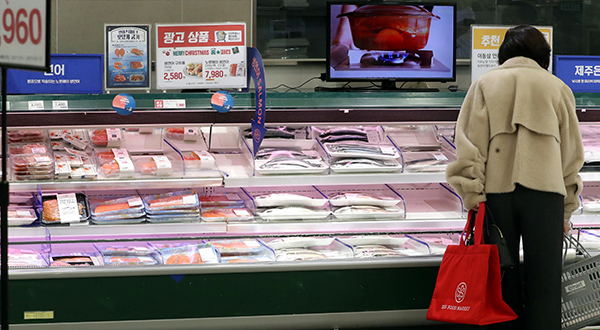 이미지 확대
Consumer confidence in South Korea weakened for the first time in four months in December with consumers` outlook on future economic growth and future spending falling sharply as the country went back under tightened mitigation rules to combat escalating coronavirus outbreak since November.

The composite consumer sentiment index (CCSI) for December stood at 103.9, down 3.7 points from the previous month, according to data from the Bank of Korea on Tuesday. It is the first drop since August. Sentiment has been on recovery track in line with growth in vaccination rate with the index rebounding to 103.8 in September, 106.8 in October and 107.6 in November.

The reading above 100 means there are still more people optimistic about the economic than pessimistic, whereas the reading below 100 means the opposite. 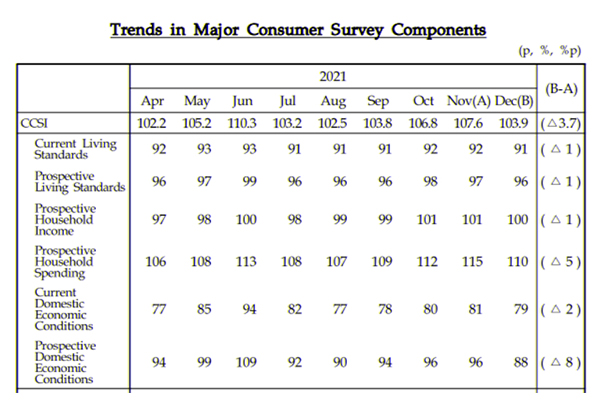 Nearly all indexes composing CCSI retreated in December, with spending on travel, dine-out, leisure and cultural activities plunging the most due to the country’s return to strict lockdown measures amid spread of Omicron variant, according to the central bank. The fall in current and future state of living also suggests consumers were still worried about inflation, it added.

The number of daily Covid-19 cases in Korea has been ebbing since peaking above 8,000 in mid-December, although still in the four-digit number above 3,000.

The index measuring confidence in future economic outlook declined 8 points on month to 88 in December, the lowest since 81 in December last year. This has led to the sharp fall in readings for outlook on job opportunities and housing prices by each 9 points to 89 and 107.

Readings for consumer view on current economic conditions also shed 2 points to 79, those on future spending dipped 5 points to 110.

Consumer expectations on future household income retreated 1 point to 100, and those on future and current state of living also fell 1 point to 96 and 91, respectively.

The index measuring expectations for inflation was down 1 point to 151. Expected inflation for the following year inched down 0.1 point to 2.6, while consumers’ perceived inflation over the past year remained unchanged at 2.7 percent.

Outlook on higher interest rates inched down 1 point to 137, but remains high compared to 110 and 120 levels earlier in the year to underscore jitters about inflation and rate increases.

This also led to a rise in reading measuring outlook on household debt conditions which added 1 point to 100.