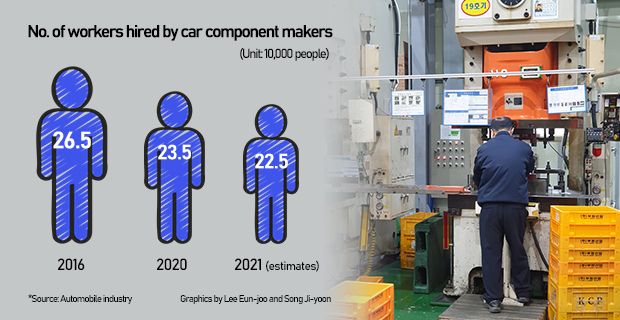 According to Lee Hang-koo, researcher at Korea Automotive Technology Institute, the country had 8,966 auto parts suppliers employing 10 or more as of last year. Their payroll decreased to 225,000 from 235,000 last year.

The auto parts industry has hit downhill after peaking in 2010-2015 when companies added by 1,700 and employees 100,000 in line with the shift to hybrid and electric vehicles.

Manufacturers were not able to properly respond to the rapid change in industry environment as they mainly focused on engines for diesel locomotives.

In a survey conducted by Korea Automobile Manufacturers Association of 300 local car and car component manufacturers including three finished automakers between August and October, nearly half were not prepared for a shift to EVs. Only 17.7 percent responded they were adjusting to the new environment.

Companies cannot complain of their hardship as lenders could call off loans on favorable rates under government backing.

A mere downsize in components is bringing adverse effect on the industry as a whole.

The industry however cannot afford migration to electric components through research and development.

As of last year, of 8,966 auto parts makers, only 2.3 percent, or 210 companies are capable of manufacturing components for future vehicles such as electric motors.

Lee from Korea Automotive Technology Institute noted that mid-size manufacturers are holding out with funds they earned during heyday from 2010 to 2015 but smaller players can only survive by reducing factory workers.

Companies that had invested minimum $10 million on research and development a year totaled less than 300 and fewer 100 who kept up such spending for three years, according to Lee. 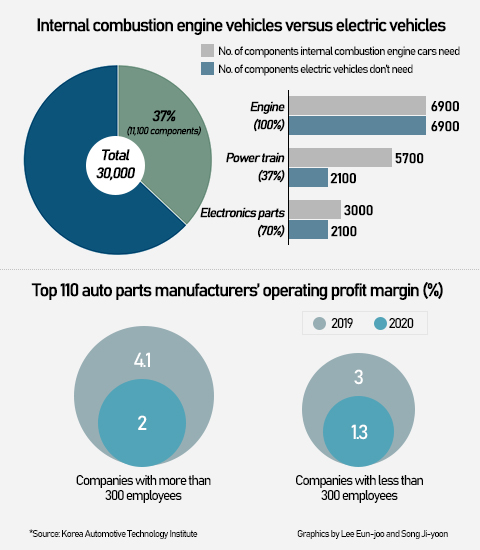 이미지 확대
Production hiccups at finished carmakers due to parts shortage have made matters worse for Korean components industry.

According to data from the Ministry of Land, Infrastructure, and Transport, a total 407,000 cars were newly registered in the third quarter of this year, down 14.8 percent from the previous quarter.

Auto component makers also face increased labor cost burden in a Covid-19 environment as they need to hire local workforce that can make up for shortage in foreign laborers.

According to the Ministry of Public Administration and Security on Sunday, foreign workers in Korea declined 11.6 percent in the January-November period from last year.

Companies also need to cope with rising materials costs for component production, mainly those of cold rolled plate and copper.

The main ingredient in an internal combustion engine vehicle is steel while in an electric vehicle copper.

Industry experts fear a chain bankruptcy in the supply chain when EV migration is accelerated.

The United States announced a goal of 50 percent electric vehicle sales by 2030 while the European Union and China to halt sales of internal combustion engine vehicles from 2035.