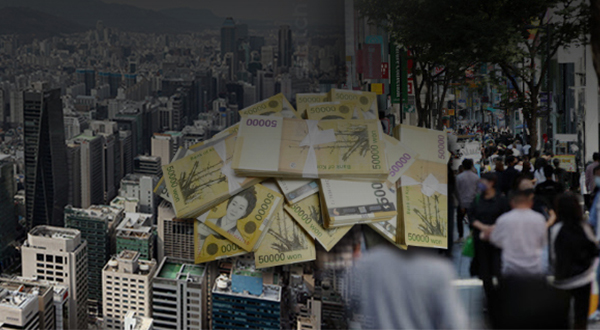 이미지 확대
South Korean government debt ratio against the gross domestic product (GDP) would top 50 percent for the first time next year after the country has packaged a record-sized budget for the second consecutive year to combat Covid-19 crisis.

The country’s national debt was estimated at 1,064.4 trillion won in the 607.7 trillion won 2022 budgetary scheme the National Assembly passed on Friday.

Debt size and its ratio against the GDP would pass milestones of 1,000 trillion won and 50 percent. The debt-to-GDP ratio would be up from 47.3 percent this year.

Consolidated gross fiscal deficit to GDP ratio is estimated at 2.5 percent for next year, down 1.2 percentage points versus this year.

The government and legislative managed to lower fiscal debt estimates in the next year’s budget plan after agreeing to set aside 3.9 trillion won to reduce national debts from next year’s tax income.

The final budget stretched in both income and expenditure account from the government’s outline.

Expenditure for next year was projected at 607.7 trillion won after the review, up 8.9 percent versus this year. The country’s expenditure has increased around 9 percent every year since 2019.

Revenue target was set at 553.6 trillion won, up 7.6 percent compared to this year.