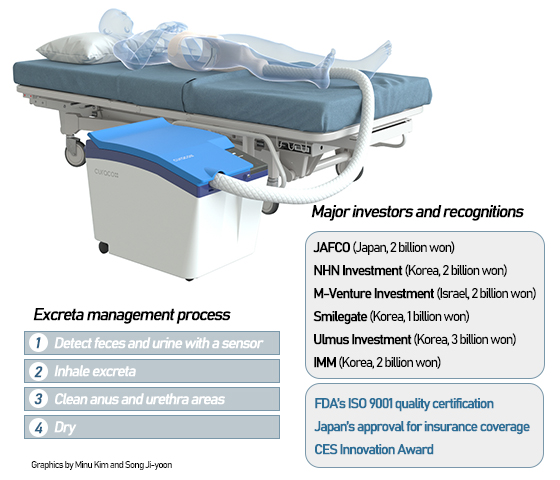 이미지 확대
A Korean startup called Curaco has made strides in Japan with a rentable excretion care robot customized for the society where adult diapers cause multiple problems as they represent 90 percent of hospital wastes and 5 percent of total wastes across the aged country.

The namesake product is a robot for `excretion care` that automatically handles the excretion of the elderly, the disabled, and bedridden patients without using paper diapers or toilets. This product has a whopping 117 patents filed and won the Innovation Award at CES 2020, the world`s largest home appliance show.

The product was developed first in Japan, but the fact that Japan’s long-term care insurance was applied to the Korean venture company’s product is a testament to show its technology superiority, the company’s CEO Lee Hun-sang told Maeil Business Newspaper on Tuesday.

Eligible users can rent a Curaco product at 10 percent of the cost in Japan and the remainder is covered by insurance. Japan`s largest venture capital JAFCO invested 2 billion won ($1.68 million) in Curaco in 2013, followed by 10 billion won in combined investments from leading domestic and foreign investors such as NHN, IMM, and Smilegate.

Lee started devising an automatic care system 15 years ago when his father collapsed from a cerebral infarction. Lee quit his job and started business for excretion care robots in cooperation with his older brother, who was an engineer.

The product costs 11 million won and the rental service is 440,000 won a month, which is not cheap, but Lee has high expectations for full-scale sales next year as a pilot project with the government and university hospitals in Korea is being prepared, Lee said.

The company`s plan is to start a device rental service for homes and high-end elderly care hospitals, and to popularize it by receiving the government`s long-term care insurance for the elderly.

Lee envisions his ultimate goal is to become the world`s largest defecation data-based healthcare platform as Curaco can collect data of users in connection with toilets equipped with internet of things (IoT) technology.

By Chun Beom-joo and Minu Kim