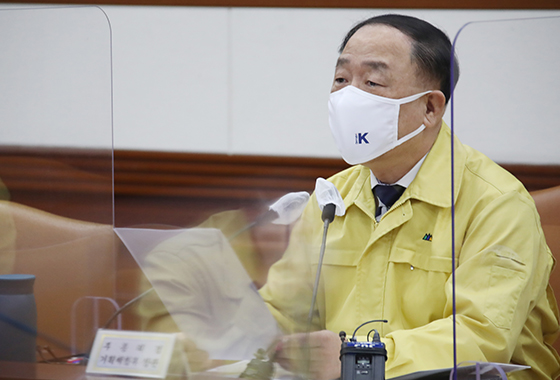 South Korea will extend the 30 percent exemption in sales tax for car purchases for another six months and employ some of the excess tax revenue to expedite additional $10.7 billion relief for self-employed and virus-hit sectors.

Hong Nam-ki, finance minister and deputy prime minister chairing an economic emergency meeting on Tuesday said that the government will grant individual consumption tax cut on passenger car purchases due to expire this month until June next year, according to a press release from the Ministry of Finance and Economy.

Sales tax on car purchases came down 30 percent to 3.5 percent from 5 percent amid sluggish domestic demand from July 2018 to December 2019. The tax rate was further lowered to 1.5 percent during the first half of last year amid pandemic and returned to 3.5 percent in the second half.

Hong specified how the excess tax revenue of 19 trillion won would be spent after the debate of using the sum for a third universal relief fund ended with the ruling party presidential candidate withdrawing the idea.

Of the extra tax revenue, 5.3 trillion won will be employed to help merchants and individuals who had suffered big from social distancing measures and another 2.5 trillion won to stabilize the bond market and reduce government debt.

With other reserves, the government will expedite 12.7 trillion won ($10.7 billion) in additional support measures for those hit by Covid-19, with 10.8 trillion won going to small merchants.

Special loans will be offered at a record low 1.0 percent interest rate for up to 20 million won. Tourism fund loans given out to businesses in travel and accommodation sectors will also be offered a temporarily lower interest rate of up to 1 percentage point and payment will be pushed back for one year.