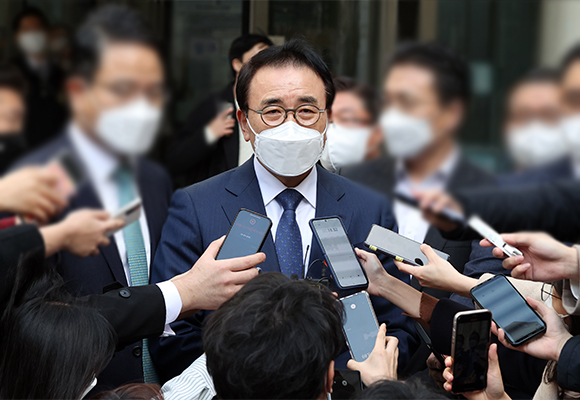 Shinhan Financial Group Chairman Cho Yong-byoung has been acquitted of involvement in irregular recruiting in appeals court, enabling him to bid for a third term in command over South Korea’s leading financial institution.

The Seoul High Court on Monday cleared Cho in charges of favoritism for hiring family members of senior financial officials, overturning the lower court’s ruling sentencing him to six months in jail with a suspended sentence of two years.

The removal of the legal hurdle allows Cho to maintain his title as chairman of Shinhan Financial Group until the term ends in March 2023 and seek an extension for a third term.

Under the country’s law and Shinhan’s internal rules, anyone who is sentenced to a jail term or grave fine cannot serve as a senior executive manager at a financial firm for five years.

Cho, along with six hiring managers, has been accused of giving favors to children of influential people, including former Shinhan Financial Group chairman Ra Eung-chan and Financial Supervisory Service’s deputy governor from 2013 to 2016 when he worked as Shinhan Bank’s chief executive.

The accused were also charged with violating the equal employment opportunity act by manipulating the gender ratio of the final candidate list.

Shinhan Bank as a corporate entity was also sent to trial.

The first court found Cho partially guilty. It determined Cho wielded power as the bank’s top executive by informing about the family background of job applicants although he did not directly order hiring managers to pass the certain people.

The appeals court, however, judged Cho as not guilty, as two of the three applicants in question for preferential hiring, fairly passed all hiring reviews. It also dismissed a related charge on the third applicant after the person in question failed to pass the interview round, said the court.