According to data released by the Bank of Korea (BOK) on Tuesday, the composite sentiment index (CCSI) stood at 107.6 in November, up 0.8 point from a month ago. The index has been inching up for three straight months from 103.8 in September and 106.8 in October.

Of six major indicators that make up the CCSI, the index for prospective household spending and current domestic economic conditions rose 3 points and 1 point, respectively, in November versus October, mainly contributing to the gain in CCSI. 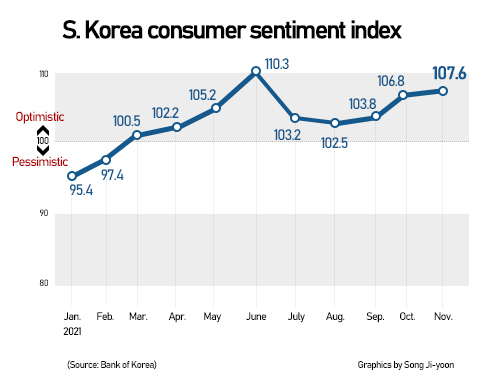 이미지 확대
The BOK noted that the rise in overall consumer sentiment index is mainly driven by the improvement in prospective household spending index on high expectations for a gradual return to normal life under the government’s “living with Covid-19” scheme.

Consumer confidence gains however have been weighed down by inflation concerns.

Prospective employment opportunities, although not included as CCSI indicator, rose 4 points to 98, while the BOK’s prospective interest rates index rose 5 points to 138 in November on growing expectations for an additional rate hike and inflation concerns. It is the highest figure in nearly 11 years since March 2011.

Prospective housing prices, however, fell 9 points to 116 in November amid the government’s tighter regulations to curb runway housing prices.