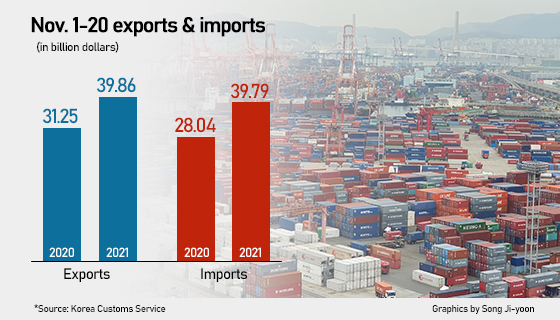 이미지 확대
South Korea sustained near 30-percent growth in the year-end shipments, keeping to the path to end the year on record exports, while a state think tank projected the record to stretch in the coming year.

According to the Korea Customs Service on Monday showed the country’s exports from Nov 1 to 20 came to $39.9 billion, up 27.6 percent from a year-ago period. Average daily exports were up 23.7 percent on year, based on 16.5 working days, 0.5 day more than a year earlier.

At this pace, the country will end November with the growth streak in exports extended to 12 months. Exports have been at monthly highs for the past two months after finishing September with $55.9 billion and October with $55.6 billion.

The country recorded a trade surplus of $73 million for the first 20 days of November, down sharply compared to $3.2 billion made a year earlier.

On the same day, the Korea International Trade Association’s research institute forecast the country’s exports would continue to show strong gains next year.

The research institute has estimated the country’s chip exports to top $12 million this year and next year.

Other electronics components and petroleum exports are also anticipated to stay on a strong growth trajectory.

Strong year is also expected for Korean exporters of petroleum and petrochemical products as both price and demand are anticipated to continue growth throughout next year, propelled by the global economic recovery.

However, Korea’s steel exports will likely reverse to a fall of 9.0 percent as prices would start to stabilize. Car parts export is projected to decrease 1.0 percent from the prolonged chip shortage problem. White goods export is expected to decline 8 percent.