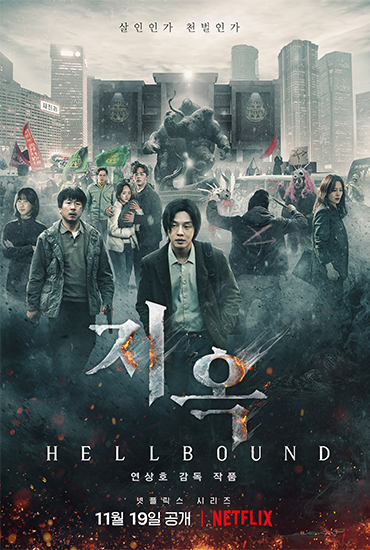 Netflix original show Hellbound produced by a Korean team debuted at No.1 thanks to the global viewers’ high expectations for Korean original TV shows after the global sensation Squid Game, the streamer’s biggest show to date.

According to streaming ratings site FlixPatrol on Sunday, Hellbound ranked top in the list of Netflix’s most-watched TV shows, just a day after its release on Friday. It is the fastest ascend to the top among Korean shows, compared with global mega-hit Squid Game that reached the top place five days after its release.

Hellbound climbed on top in 24 countries including South Korea, Hong Kong, Singapore, Belgium, Saudi Arabia and South Africa. It came second in 17 regions including France, India and Brazil and third in 11 nations including the United States, Canada and Germany.

Hellbound depicts a story about a society that falls into chaos as people suddenly are notified the exact time of their deaths and otherworldly beasts kill those people and send them to hell when the time comes. Soon, a religious group is founded to exploit the social turmoil and strengthen their influence.

The show is directed by Yeon Sang-ho, the director behind Train To Busan, a globally successful zombie apocalypse film that gave birth to K-zombies. It is based on a digital comic of the same title by Yeon and Choi Gyu-seok.

The explosive initial popularity has been driven by the increased interest in Korean shows after Squid Game’s smash hit, some experts said. Hong Suk-kyung, a professor from the Seoul National University, said that Neflix is serving as a channel that has been broadening Hallyu, Korean culture’s global popularity, to Korean content and giving rise to K-genre.

On the back of the immense popularity of original Korean shows, Netflix has added more and more subscribers in Korea. According to Nielson Korean Click, the number of monthly active users (MAU) of the U.S. streaming giant in the country reached a record high of 9.48 million in September. The streamer said last week that it would raise its subscription fees in Korea for the first time since its entry in 2016.