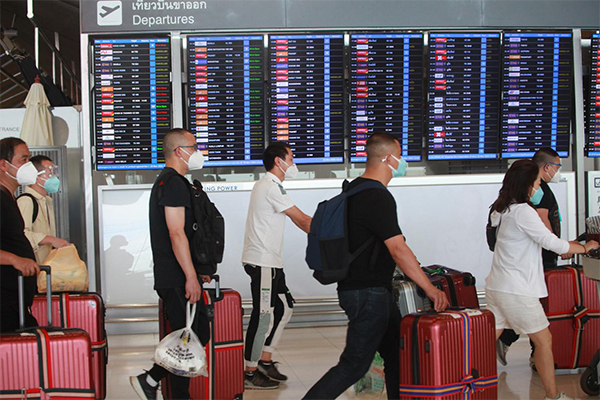 Suvarnabhumi airport has seen an uptick in arrivals following the country"s reopening on Nov 1. Somchai Poomlard

The economy is expected to grow by 1.5% this year boosted by the easing of Covid restriction measures and the country`s reopening, and 4.2% next year, according to the latest forecast by the University of the Thai Chamber of Commerce (UTCC).

UTCC president Thanavath Phonvichai said on Thursday the country`s reopening is believed to help draw around 200,000 international tourists and raise overall consumer spending during the remaining months of the year, boosting GDP by 0.83 percentage points.

Exports are also projected to grow healthily this year by 16.5% with inflation staying at 1.2%, he said.

"We believe the economy has passed its lowest point as indicated by recovering sentiment, be it among consumers, businesses, modern trade or foreign investors who expect the Thai economy will start improving in the fourth quarter," said Mr Thanavath.

"The UTCC predicts the economy in the fourth quarter to grow by 2-3% from the same quarter last year, stemming from many supporting factors such as the government`s easing of restriction measures which allow many businesses to resume operation, the country`s reopening for fully-vaccinated foreign tourists, and additional government spending on stimulus packages. We estimate that as much as 250-300 billion baht will be injected into the economy later this year."

According to Mr Thanavath, the Covid-19 infection situation in the country has started to be controllable, with the number of infections and deaths gradually dropping, while the vaccine distribution rollout has progressed better than expected.

More importantly, Mr Thanavath said, grave concerns about a possible recurrence of outbreaks after the country`s reopening have proven to be unfounded.

Mr Thanavath noted this year`s economy also has a chance to outpace the 1.5% growth projected by the UTCC if exports and tourism grow better than hoped, while the government introduces additional spending stimulus measures such as the fourth phase of the co-payment subsidy scheme and the extension of the tax rebate scheme `Shop Dee Mee Khuen` until Chinese New Year in 2022.

Regarding next year`s economic prospects, Mr Thanavath said exports will remain instrumental to Thailand`s economic growth, while private consumption is expected to recover and the number of foreign tourist arrivals is expected to increase to 5 million next year.

The university predicted export growth to slow to 5.4% next year from 16.5% this year.