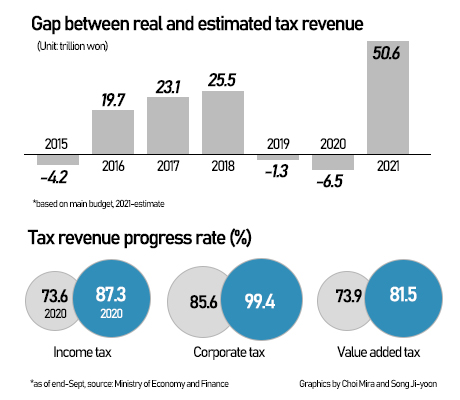 이미지 확대
The South Korean government has lost creditability for a string of erroneous from slight estimation on tax revenue to base budgeting to miscounting in tax income.

Based on the fiscal balance released by the Ministry of Economy and Finance Tuesday, the country’s tax revenue grew 59.8 trillion won ($50.6 billion) to 274.5 trillion from January to September compared to the same period a year earlier, surpassing the government’s estimated surplus tax of 31.5 trillion won.

The excess tax amounted to 50.5 trillion won, 17.9 percent higher than the estimate in the original budget for 2021.

The government collected 65.2 trillion won ($55.2 billion) in corporate tax from January to September, according to the Ministry of Economy and Finance on Wednesday, 99.4 percent of this year’s target tax revenue of 66.5 trillion won.

The gain is mainly driven by a 69.1 percent jump in operating profits of Kospi-listed companies to 50.1 trillion won for the first six months of the year from 29.6 trillion won in the same period last year.

Income from corporate taxes is expected to exceed 100 percent of this year’s target at current rate.

The rapid collection of income tax is driven by a huge growth in transfer income tax on the booming asset market and a 4.4 percent gain in nominal wages, compared with 1.1 percent last year. The value added tax grew by the rise in import prices.

Finance minister Hong Nam-ki apologized for the huge gap but expressed his regret over the opposition parties’ argument that it had been intentional in underestimating revenue.

On Tuesday, the Ministry of Finance and Economy projected 10 trillion won in additional tax revenue this year versus the estimate in the budgeting for the second supplementary budget in July, but later in the day corrected the sum to 19 trillion won. Since 31.6 trillion won had been booked as excess revenue in July budgeting, tax revenue in excess from the original budget for 2021 could be around 50 trillion won.

By Chun Kyung-woon and Choi Mira