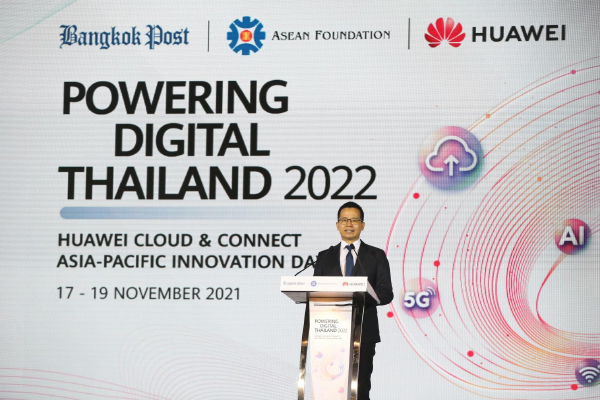 Thailand is expected to become Asean`s low-carbon leader, driven by a digitalisation journey through the support of the country`s innovation infrastructure, according to global tech giant Huawei Technologies.

The tech giant also announced that its third Huawei Local AZ data centre in Thailand is now in service.

These views were shared on Wednesday by Abel Deng, chief executive of Huawei Technologies Thailand, on the first day of Powering Digital Thailand 2022 – Huawei Cloud & Connect, in conjunction with Asia-Pacific Innovation Day, which explores innovations, technologies and business opportunities.

The three-day event is being held at the Centara Grand & Bangkok Convention Centre at CentralWorld.

Digitalisation is not only a crucial power for economic resilience but also a potential driver for a low-carbon and sustainable society, Mr Deng said.

A strong ICT industry and digitalisation foundation are proving to be the keys to economic resilience. The sudden outbreak of Covid-19 has caused digital transformation to accelerate by 5 to 7 years globally, and 10 years in Asia-Pacific.

In the near future, digital technologies including 5G, the cloud, and artificial intelligence will assume the main responsibility for driving economic growth, he said.

Like other countries, Thailand could also face various uncertainties in years to come. "In order to be better prepared, promoting economic resilience through digitalisation is an urgent mission," Mr Deng said.

"We [Huawei] are very encouraged to see that Thailand is the first Asean country to commit to carbon neutrality," said Mr Deng.

At the 2021 United Nations Climate Change Conference (COP26) earlier this month, Thailand proposed a carbon neutrality 2050 roadmap to address climate changes, which is the same as the European Union`s milestone. 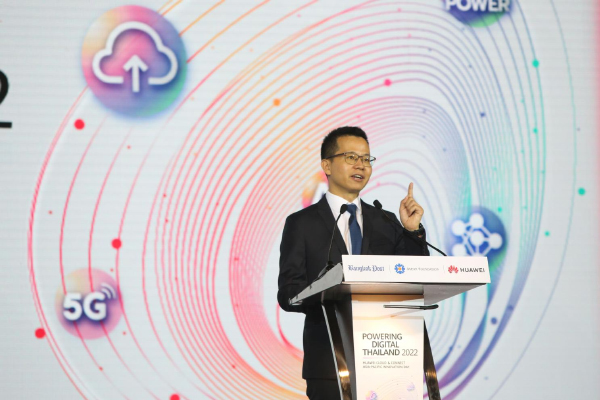 According to Mr Deng, Huawei proposes four layers of support to drive the low-carbon digital path.

According to a joint forecast by the Office of the National Digital Economy and Society Commission, Time Consulting and Huawei, the 5G-powered economy will reach 2.3 trillion baht by 2035, accounting for 10% of the country`s GDP.

Thailand is now a leading 5G force in Asean, Mr Deng said. Thailand has deployed 20,000 5G stations and reached 4.3 million 5G users, which is 2.5 times the total number of 5G users in other Asean countries.

Huawei, he said, has worked with many Thai partners to launch pilot 5G projects in different industries such as healthcare and agriculture.

Secondly, Thailand is recommended to strengthen its digital platform, capitalising on Huawei Cloud.

Digital transformation has been accelerated in Thailand during the pandemic.

According to a Deloitte report, from 2020 to 2021 the ratio of Thai companies using the cloud has increased from 59% to 78%. By 2030, 87% of companies will use cloud platforms and the digital economy will account for 30% of Thailand`s GDP.

As digitalisation is being adopted around the globe, data localisation becomes a key trend, Mr Deng said.

He said Huawei Cloud is the only cloud service provider with a local data centre in the Thai market. It has more than 300 partners in Thailand and 3,500 marketplace offerings.

"The energy transition brings massive business opportunities and it will be the largest industry in the next 30 years," he said.

According to UBS forecasts, in the next ten years global energy transition investments will reach US$50 trillion, accounting for 40% of total investment.

In the next decade, Thailand`s energy transition is set to develop at a rapid speed, which will bring about 1% GDP growth, he said.

"Huawei fully commits to supporting Thailand to become the Asean low-carbon leader, and we are confident about achieving this goal with our technology expertise and global practices," Mr Deng said.

Finally, Thailand needs to cultivate thriving innovation and talent through a partnership ecosystem.

According to Mr Deng, the total demand for digital talent in Thailand will exceed 1 million workers by 2030. And there will be a 400,000-person gap in the digital workforce supply.

Huawei will continue to build Thailand`s ecosystem platform and talent programme, he noted.