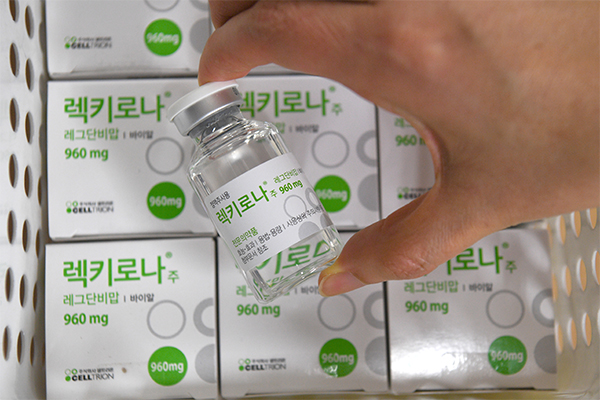 Celltrion Inc.’s shares flew off Monday upon a rare fast marketing authorization of its Covid-19 antibody treatment Regkirona in Europe, making the first Korean completed therapy to be licensed in the euro zone.

The European Commission on Friday gave a go-ahead to marketing of Regkirona, just a day after the Committee for Medicinal Products for Human use (CHMP) under European Medicines Agency (EMA) adopted a positive opinion for marketing authorization of the monoclonal antibody treatment. In general, it takes one to two months for a drug to win final approval after positive opinion by the CHMP.

The rare superfast authorization came as Covid-19 is rapidly sprawling across Europe, prompting many states to consider lockout and other restriction measures after full lifting.

Regkirona makes the first Korean case to be licensed overseas as fully self-developed product by a Korean drug-maker from the discovery of candidate material to completion of three clinical trial process.

It can open a new chapter on Korea’s bio novel drug development, which so far has mainly targeted technology transfers. Local biopharmaceutical companies usually took profit through technology licensing out before the final phase clinical trial and marketing.

Lee Seung-gyu, vice chairman of KoreaBio, said that the latest achievement raises hope for other local bio medicine developers to seek “complete portfolio” from development to marketing overseas. It is also significant that Celltrion was able to make an inroad with its own novel drug into bigger market Europe.

The feat also can motivate Korean companies to move beyond contract manufacturing organization business and biosimilars to explore novel drugs.

Celltrion’s Covid-19 therapy Regkirona has proven in efficiency and safety. The drug reduces progression rate in severe cases among high-risk groups by 72 percent, and improves recovery time by more than 4.7 days as to placebo groups.

Celltrion is aiming for the U.S. market as the next step. It is engaged in pre-meeting for marketing approval with the Food and Drug Administration with Regkirona.

By Han Jae-beom and Lee Eun-joo