Korea’s import prices up 35.8% in Oct. with more pressure on inflation

Import prices in South Korea rose for the sixth straight month in October, hitting the highest level in nearly nine years, amid a rise in crude oil and commodity prices, putting growing pressure on inflation.

According to data released by the Bank of Korea on Friday, the import price index grew 4.8 percent in October from a month earlier to 130.43, adding for six months in a row to hit the highest level since February 2013.

Import prices of mining products gained 11.1 percent on month in October and coal and petroleum products 10.8 percent. The price of benchmark Dubai crude rose 12.4 percent from $72.63 to $81.61 per barrel in October from a month ago.

Choi Jin-man, head of price statistics at the BOK, said that import prices rose on a surge in international oil and raw materials prices. 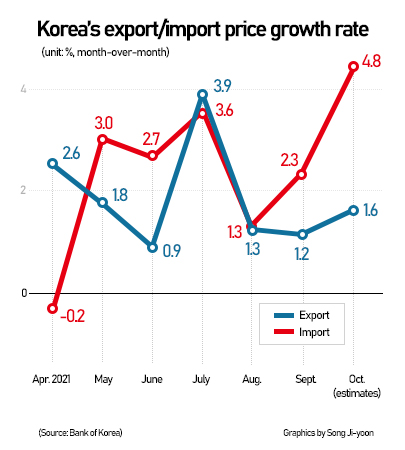 Choi from the BOK noted that prices of chips in particular declined 3.5 percent, marking the first decline this year.