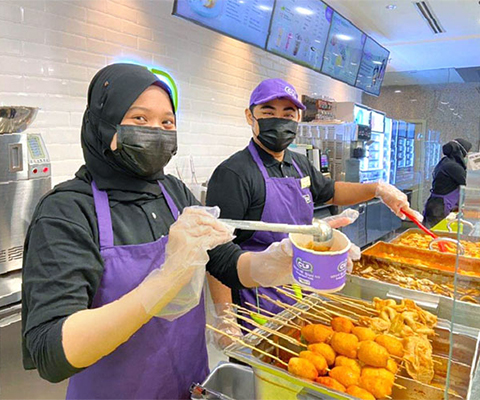 South Korean food makers are tapping deeper into the global market as tteokbokki, one of the most popular Korean street foods, is selling like hotcakes in Europe and the Middle East backed by the growing global interest in Korean pop culture.

According to data from Korea Customs Service, the exports amount of rice tteokbokki totaled $53.76 million in 2020, more than tripling from $16.03 million in 2017. The volume of exports also nearly tripled over the same period from 6,008 tons to 16,996 tons.

The surge in exports of Korea’s iconic street food is thanks to local food makers’ deeper penetration into the global market as tteokbokki has become a newly favored snack of global consumers with Korean contents and pop culture taking the world by storm.

Samyang Foods Co., one of leading Korean food makers, is selling tteokbokki products in about 50 countries through its distribution networks built on the power of its global hit super-spicy Buldak series instant noodles. According to the company, newcomers like the Netherlands, Canada and Bhutan where Korean food has not been popular have landed on the list of top export destinations this year.

“God of Topokki,” an instant tteokbokki brand from Dongwon F&B Co. which is set to break a 20-billion won milestone in annual overseas revenue, is marketed in more than 30 countries including the United Arab Emirates, American Samoa and Colombia.

Korean convenience store chain CU added an outlet in Malaysia in April and launched rosé sauce-based tteokbboki last month on the back of huge popularity of its original-flavored tteokbokki that ranked at No.1 in sales.

Local tteokbokki restaurants are also expediting their global foray. Guljak Topokki opened two more outlets in Thailand after launching its first store in 2019 and is preparing to open its first outlet in Australia at the end of November.

By Jin Young-hwa and Lee Soo-min