이미지 확대
NCSoft Corp. shares declined Friday morning amid profit-taking after a 30-percent jump in the previous session, buoyed by the buzz of a new release that will employ non-fungible token (NFT) technology despite unsatisfactory earnings in the third quarter.

NCSoft shares tanked below 600,000 won during a session on Thursday after the company reported worse-than-expected earnings results.

NCSoft said its operating profit shriveled 56 percent on year and revenue 14.5 percent due to tepid market responses to its new title “Blade & Soul 2” and the excessive pay-to-win billing model in its flagship series Lineage which has chased away gamers in droves. 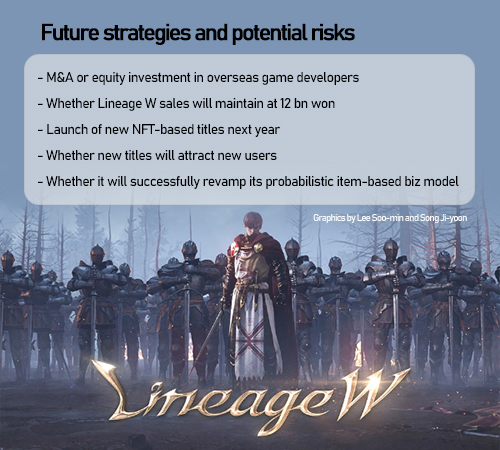 이미지 확대
The company is expecting a rebound in performance in the coming quarters as it is readying to launch new NFT-based, play-to-earn titles next year, its chief financial officer Hong Won-jun announced on Thursday.

Hong said the company has already completed technology reviews on the creation of its own cryptocurrency for its NFT-powered massively multiplayer online role-playing games.

Industry watchers predict that the new titles will be marketed abroad as play-to-earn models are banned at home for being speculative.

NCSoft expects the new NFT-based games and its latest title “Lineage W” raking in record-breaking sales will provide a new driver for its business.