Korea should reconsider nuclear phase-out policy if favored by the majority: KEPCO CEO 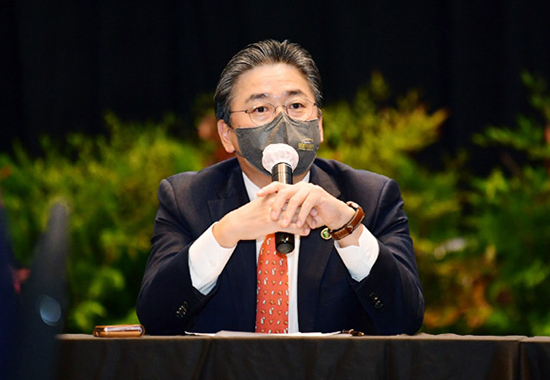 South Korea should reconsider its nuclear phase-out policy if a majority of the people are in favor of the energy source, said Cheong Seung-il, chief executive of state-run Korea Electric Power Corporation (Kepco).

“Globally, the debate around energy sourcing is so dichotomic,” Cheong told reporters at Bitgram International Exposition of Electric Power Technology (Bixpo) on Wednesday. “It is concerning that discussions in Korea around particular energy become a black-and-white choice.”

He added how local nuclear power issue should not be politicized and it should be discussed based on scientific and technical grounds.

The Ministry of Trade, Industry and Energy under its 8th Basic Plan on Electricity Demand and Supply aims to reduce reliance on nuclear power from 30.3 percent in 2017 to 23.9 percent in 2030, Cheong noted. He said the government should rethink its plan when there is public consensus on the need of nuclear energy.

Cheong is not alone in this view. Last month, Chung Jae-hoon, chief executive of Korea Hydro & Nuclear Power (KHNP), also made remarks during a parliamentary hearing that the country should resume planned construction of additional nuclear power plants.

Former United Nations Secretary General Ban Ki-moon said that carbon neutrality cannot be realized without nuclear energy during his keynote speech at Bixpo. Ban noted that the government’s plan is to up renewable energy share to 70.8 percent without nuclear energy, but many experts believe that would be impossible given local geological and climate conditions.

“France and Britain have recently decided to expand nuclear energy and China plans to add 150 reactors over the next 15 years,” Ban said. “That is because they acknowledged that carbon neutrality would not be realized without nuclear energy.”

When it comes to completely phasing out of coal power in 2050, Cheong said that related authorities will have enough discussions for an orderly exit from coal with a comprehensive review for the level of compensation for stranded assets and changes in work of related employees.

Cheong also said KHNP’s role will not be reduced despite the phase out policy, given that KHNP still operates 24 reactors and two more will be added, and there is no reason for KHNP to be “undervalued.” He also noted that KHNP has plans to develop small module reactors which is now in a preliminary evaluation stage. “Investment in innovative reactors will continue,” Cheong said.

Kepco, meanwhile, Friday reported operating losses for the third quarter, continuing to lose money for two consecutive quarters. The company suffered an operating loss of 936.7 billion won in the July-September period on a consolidated basis, going into the red versus 2.3 trillion won profit a year ago.