South Korea’s job market extended its gaining streak in October, with payroll additions staying above 600,000 for the second straight month and unemployment at the lowest for the month in eight years in the latest sign of a recovering economy.

According to data released by Statistics Korea on Wednesday, the number of employed reached 27.74 million in October, adding 652,000 from the same month a year ago.

The pace of growth eased from September when the country reported the biggest payroll increase of 671,000 in seven years but remained above the 600,000 level.

All age groups except those in their 30s added jobs, data showed.

Healthcare and social welfare service sector gained the most 300,000 jobs, transportation and warehousing 163,000 and education service 108,000.

Employment in accommodation and eatery sector kept up growth for two consecutive months as the country began to return to normalcy after the months-long restrictions on social gatherings to contain virus outbreak. 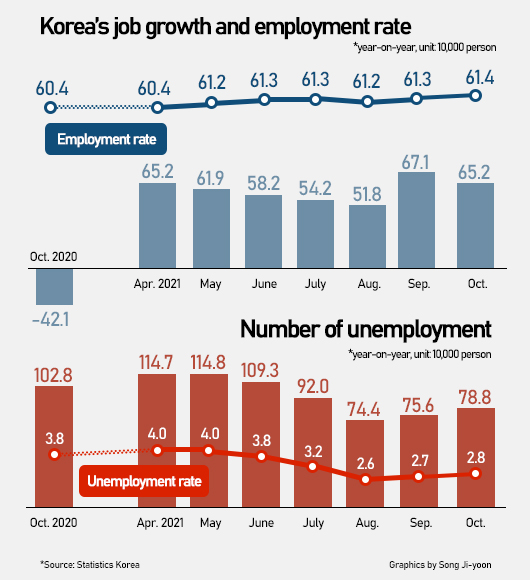 이미지 확대
The number of self-employed with no paid hires increased 45,000 while those with paid workers decreased 26,000.

Most of the new hires worked less than 36 hours a week, accounting for 5.21 million. Longer-hour jobs were lost by 4.44 million.

The employment rate for those aged 15 years and older came to 61.4 percent, rising 1 percentage point from the same period a year ago.

Economically inactive population – those neither working nor actively seeking jobs –fell 116,000 on year to 16.6 million, falling for eight straight months.

Jeong Dong-myeong, head of social statistics planning at Statistics Korea, said the strong job data in October is attributed to robust exports and a base effect from last year.

The gradual return to normalcy, improving consumer sentiment and the vaccine rollout will positively impact the job market in November but uncertainty still lingers the country is seeing an uptick in new infections, Jeong added.