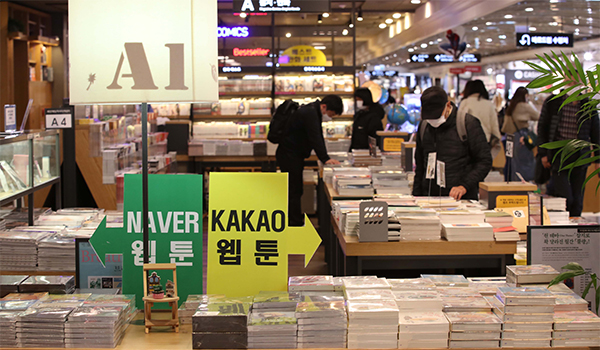 As South Korea rises fast as the new global power behind comics in the digital age, publications of popular digital episodes are flying off shelves around the globe.

Naver Webtoon, online comic publisher under Korea’s top internet platform Naver, has signed about 40 contracts with overseas publishers to publish paper-version webtoons since 2014 and more than half of them have been concluded in the past year thanks to the growing popularity of webtoons-turned-books in the global market.

“Tower of God,” one of the most beloved webtoon series on Naver Webtoon that has accumulated more than 4.5 billion views worldwide, was published in the book form in June in France and shortly after its launch, the two-volume set was sold out in the world’s second-largest comics market. 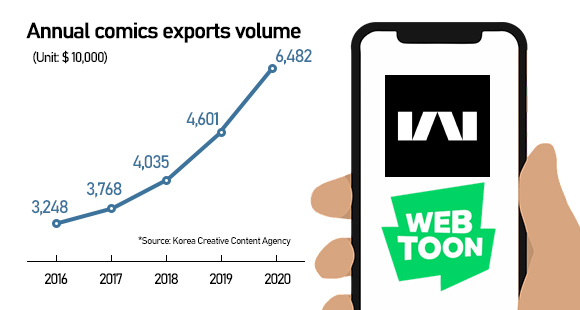 이미지 확대
Kakao Webtoon’s “Solo Leveling” has topped the best-selling comics list in France since its launch in April. Naver’s “True Beauty,” which has attracted 6.2 million viewers in France alone, and “Noblesse” are also among the top-sellers.

The mega-popular Naver webtoon “Sweet Home”, which was adapted into a Netflix original series that rose to No.1 spot in more than eight countries, has also been released in 12-volume paperback form in Taiwan. Naver’s “Your Letter” is gaining popularity in Japan and China.

According to data from the Korea Creative Content Agency, Korea’s webtoon exports volume totaled $64.28 million in 2020, jumping 40.9 percent from a year prior.

이미지 확대
Web comics in printed form strongly appeal to overseas readers as they are more used to traditional paper books than digital alternatives and unlike existing comic books, paper-version webtoons are printed in color to add appeal.

Since the global comics market is still dominated by paperback comics, Korean webtoon platforms are increasingly relying on printed webtoons to lure global fans into their platforms and diversify profit sources.

The global digital web comics market is growing at an average of 8 percent each year and is estimated to reach $1.34 billion by 2022. However, the digital segment still accounts for 18.5 percent of the entire comics market valued at $7.27 billion, according to the Korea Creative Content Agency.

By Park Dae-eui and Lee Soo-min