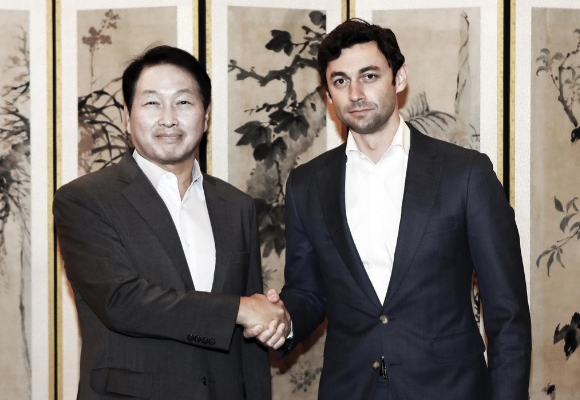 SK Group has been long established in Georgia. SK On and SKC have carried out the first and single largest investment in Georgia as a Korean firm. The conglomerate has been enhancing ties with the political scene in Georgia and academia and other regional society.

SK On – which has been in forefront in electric vehicle expansion in the U.S. – will have created about 3,000 jobs in Georgia.

SKC has also been expanding in the state. Last month, the company announced to commercialize world’s first glass substrate for high-performance computing and build a chip glass substrate production base in its site in Georgia. SKC will invest $80 million by 2023 to build a 12,000 square meter production facility. SKC maintains ties with Georgia Institute of Technology. 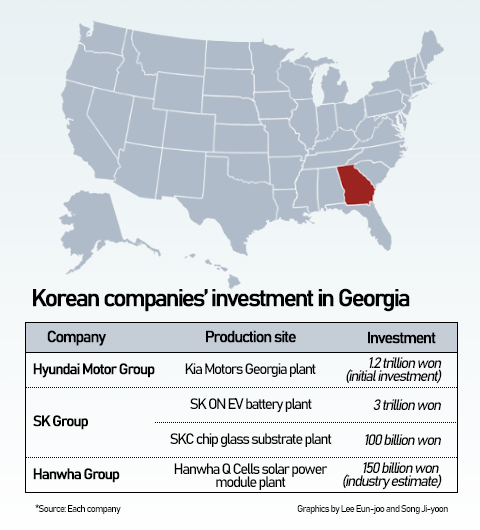 이미지 확대
According to sources, Ossoff met with Hyundai Motor Group Chairman Chung and other executives at the center and discussed Kia Motors’ plans for vehicle development and future investment plans in Georgia.

Kia Motors has been running a car production plant in Georgia for over 10 years. Discussions may have involved possible investment related to Hyundai Motor’s electric vehicle production in the U.S.

Ossoff plans to meet with officials from Hanwha Group, including Lee Koo-yung, chief executive of Hanwha Q Cells, which operates a 1.7 gigawatt solar power module plant in Georgia. The factory is considered Hanwha Group’s base for solar power business in North America.

Ossoff is expected to meet with Samsung officials before he leaves. Taylor, Texas is considered a strong candidate site for Samsung’s new chip plant in the U.S.