According to market tracker SNE Research on Monday, the combined market share of the three Korean names jumped to 34.7 percent in 2020 from 16 percent in 2019.

Samsung SDI remained unchanged at fifth with 8.2 GWh, up 85.3 percent from the previous year. SK Innovation jumped up three spots in the rankings to sixth with its EV battery usage volume more than tripling from a year ago to 7.7GWh. 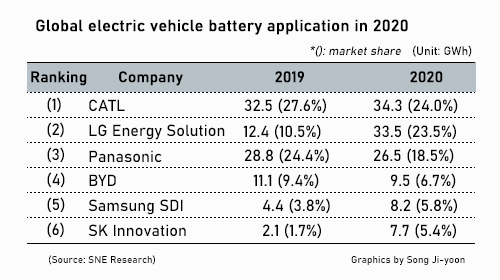 Total battery usage volume for EVs around the globe reached 142.8GWh last year, up 21 percent from 2019. Demand for EVs had tumbled in the first half of 2020 amid the pandemic but began to recover rapidly starting the third quarter.

By Choi Keun-do and Choi Mira