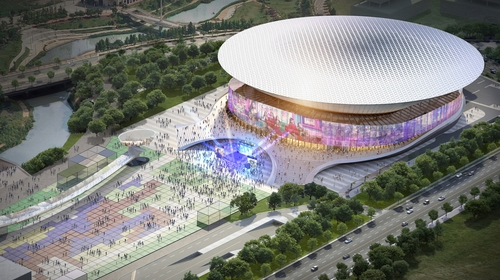 CJ ENM’s subsidiary CJ Live City (CJLC) will build the center with 20,000 indoor seats on an area of 237,000 square meters, the size of 46 soccer fields. Its outdoor hall will be capable to accommodate more than 40,000 visitors.

CJ will add a virtual reality (VR) and augmented reality (AR) theme park, hotel, experience zone and other commercial facilities to construct a K-pop complex ‘K-Culture Valley’ by 2024. “K-Culture Valley Arena was the first to break ground for establishment because of its long construction period, and the rest of the facilities will receive permission next year to complete the project by 2024,” an official from Goyang city said.

‘K-Culture Valley’ to be established on a 302,000-square-meter land will function as a hub for Korean culture. CJ plans to hold more than 170 concerts of both Korean and foreign artists a year by partnering with AEG, the world’s leading sporting and live entertainment company. The facility is expected to attract 20 million visitors a year, produce 17 trillion won ($14.5 billion) worth economic benefits and create 240,000 jobs.