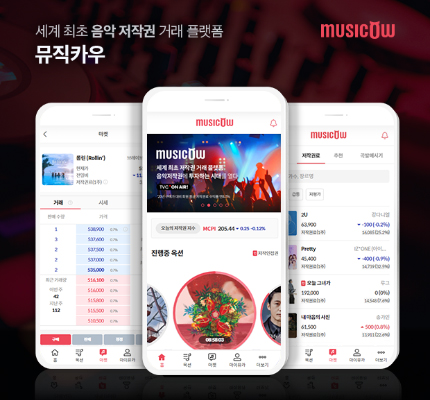 Musicow, a Seoul-based music copyrights trading platform, has hired Mirae Asset Securities to ready for its initial public offering next year amid simmering attention to the novel investment by both individuals and international capital, according to investment bank industry sources on Sunday.

Analysts project Musicow’s worth could top 1 trillion won ($851 million) after the IPO.

Musicow joined the list of candidates to grow to a unicorn with its valuation deemed to exceed 100 billion won by the Ministry of SMEs and Startups in July.

Established in 2016, Musicow purchases music copyrights from original creators, such as song writers and producers, as well as neighboring performing rights from record companies and entertainment agencies.

Then, Musicow offers the purchased rights on its platform where users can buy or sell a fractional ownership in song copyrights and collect royalties as in dividends.

The company has 710,000 users as of last month. Transaction amount on the platform amounted to 246.4 billion won this year through September, up more than seven times from a year ago. 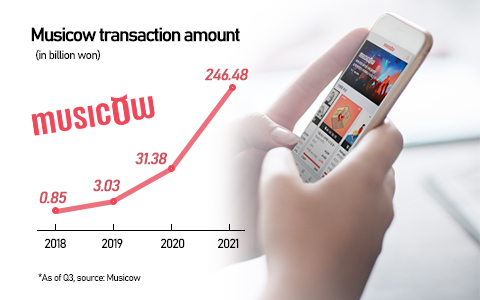 이미지 확대
Entertainment companies and investors caught up with the fad.

FNC Entertainment, label behind K-pop groups AOA and SF9, has acquired neighboring rights for 372 songs from YamYam Entertainment through its subsidiary FNC Investment for 15 billion won in March. It reportedly is exploring to buy more copyrights.

Creative artists and companies can now explore wider opportunities as more investors are willing to recognize the creative works for their future worth, said an entertainment industry official. Generally, value of a song’s copyright is set by multiplying 5 to 10 to the average royalty earnings made over the recent five years.

Analysts anticipate the worth of Korean music’s copyrights to inflate in line with the global popularity of Korean pop culture. Sweet Night, a song written and sung by V, a member of world’s biggest boy band BTS, and featured in Korean TV series Itaewon Class recorded 169 million streams on Spotify music streaming site as of last Thursday. The record is the best for Korean movie and TV soundtracks.

Global private equity firms have also been lured into the music copyrights market.