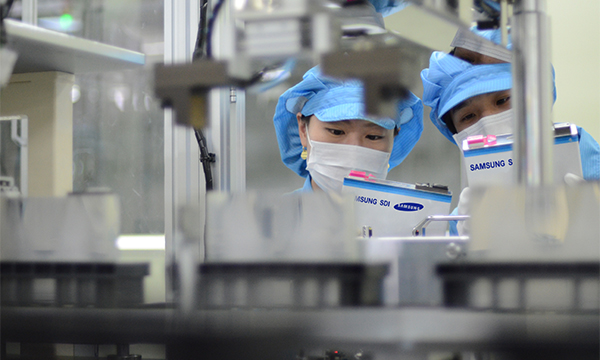 Samsung SDI Co., one of South Korea’s top three battery makers, reported a quarterly net loss in October-December statement and ended 2019 with a 35 percent fall in operating profit due to a massive one-off expense from its energy storage system (ESS) business.

The company in a regulatory filing on Thursday announced its consolidated operating profit for the final quarter ended December reached 20.1 billion won ($17 million), down 87.9 percent from a quarter ago and 91.9 percent from a year earlier.

Samsung SDI blamed the poorer earnings on the massive one-off costs from enhanced safety measures at its ESS facilities. It has installed special fire extinguishing systems for ESS at its production sites, which ate into its bottom line.

Korean battery makers have been grappling with waning ESS orders after at least 28 fires have erupted at their ESS installations since August 2017. 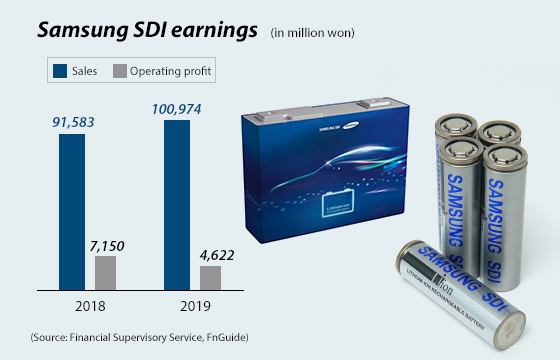 이미지 확대
For the full 2019, Samsung SDI delivered an operating profit of 462.2 billion won, down 35.4 percent from the previous year. Net profit shriveled 46 percent on year to 402.4 billion won, while sales gained 10.25 percent to 10.1 trillion won during the period.

Samsung SDI however saw solid battery sales in the fourth quarter. Its battery division earned 2.21 trillion won in revenue, up 13.2 percent on quarter thanks to robust demand for products used in vehicles, ESSs and vacuums.

As for the electronic materials business, sales slid 0.6 percent to 610.4 billion won on reduced orders for polarizing films from seasonal factors despite increased demand for semiconductor and organic light-emitting diode (OLED) materials.

Samsung SDI projected overall slowdown in its business for the first three months this year, the traditionally slow season for batteries and electronic materials. But for full 2020, it expected growth of each unit in line with the market growth for chips, electric vehicles and displays with stricter environmental regulations in Europe.