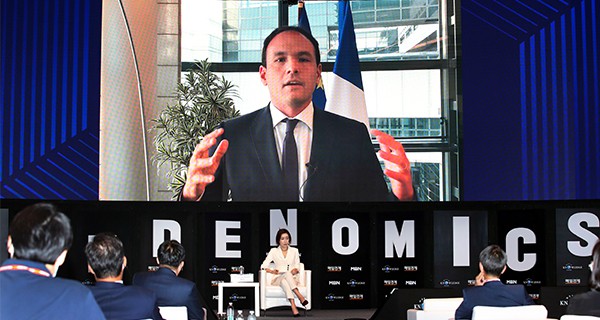 Governments around the world must work hard to bridge the digital divide among communities in the new COVID-19 era after the pandemic has accelerated digital adoption across the board, said Cedric O, minister of state for digital affairs in France.

“Digital has become a key backbone of our society and our economy,” O said. “This was true before the confinement, but even more true [now], and there has been an acceleration of the speediness of the spread of digital all around the society.”

O – born in 1982 to a Korean father and French mother – was invited to share insights in an open session titled “Digital Social Innovation” at the 21st World Knowledge Forum that kicked off on Wednesday both offline and online.

The minister is a close aide to French President Emmanuel Macron. The digital affairs ministry was newly created in March in France’s push to elevate its position in the digital world.

O said lockdowns and social distancing amid COVID-19 have so far been bearable because there was “digital.”

“Everything was digital – going to work, being able to shop, keep in touch with relatives,” he said. “Being able to have access to any information was digital. This has been reshaping our societies and economies – and that, we have to build up.”

O stressed that countries should adapt economies and the way companies are working to a new world driven by digitalization. Authorities should also work on to narrow the digital divide between those that have knowledge and those that do not as it widens the social gap.

“We have to be able to close the gap and take those population to teach them how to handle digital and how to behave in the digital world,” he said.

In France, for example, a third of the population lack basic knowledge to become autonomous in a digital world. The minister said the state has “to raise commitment to keeping everybody involved, … connecting the whole country, … and helping people how to use Internet and computers daily.”

As part of its digitalization push, France recently announced to spend 7 million euros out of 100 billion euros set aside for stimulus measures in digitalization. They will be invested in startups, building national strategies in key critical technologies such as quantum computing, cyber security, artificial intelligence, and biotech. They will also be invested in digital infrastructures and training of authorities in digital sector.

O emphasized partnership with Korea along the path.

“We have to build alliances – between Korea and France and Korea and Europe,” he said, “in order to make our way in that competition” led by two world leaders the United States and China.

“We have lots to win in that partnership because Korea has technology that France is lagging behind on,” O said, noting the fifth-generation network technology, semiconductors, and electric batteries. France, on the other hand, has technology in space, nuclear, and artificial intelligence sectors.