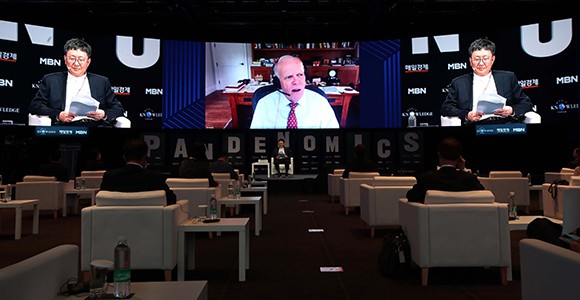 The COVID-19 pandemic has fueled the deployment of artificial intelligence to cope with the novel virus and climate challenges, said John L. Hennessy, chairman of Google’s parent Alphabet Inc. and former president of Stanford University.

“We can use machine learning to recognize complex patterns of numerous drugs in the process of drug discovery,” the entrepreneur and scholar said in a virtual session of the World Knowledge Forum, which kicked off Wednesday in Seoul.

“New drug development is a lengthy process, with too many drugs failing along the way. The real question is whether we can speed that up and increase the probability of discovery while reducing the cost of drug development,” he said.

Hennessy said AI technology could also be used to get a better understanding of what is happening in the earth dynamics and to determine what the long-term trajectory will look like and make predictions. “This can lead to radical breakthroughs in energy technologies that will allow us to go more green,” he said.

He said the pandemic is “forcing all of us to experiment” and to “do things that we would otherwise be resistant to do.”

This is most evident in schools, with universities reimagining what “we can do online and how we can make it more cost-effective,” he said.

Hennessy, who was a longtime faculty member at Stanford before becoming its 10th president in 2000, also shared his experience on growing the university during his tenure.

Hennessy said Stanford benefited greatly from its symbiotic relationship with Silicon Valley. Aspiring entrepreneurs would come to Stanford, go out, build a business and come back to school. “We had a lot of faculty who did that,” Hennessy said, adding that these people brought a lot of experience and insight that were invaluable when coaching young students.

Before closing the session, Hennessy received a question from one of the online viewers, who asked about his thoughts on creating a vibrant startup culture in Korea.

“Korea has an incredible talent base, but the country’s business scene appears to be dominated by large companies than small entrepreneurs,” Hennessy said. “That’s something that can easily change,” he added, and said students should be taught the basics of how to build a startup and the necessary fundamentals they can later build on to grow their company, which would result in a higher success rate.

“I’m a great believer that the world will be changed by the next generation,” Hennessy said. “And when I look at the energy and vitality of today’s young people, I’m optimistic about the future.”