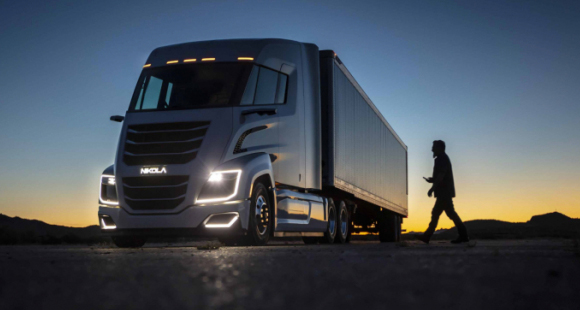 이미지 확대
LG Chem Ltd. which commands No. 1 in global EV battery market expects additional boon from its partnership with General Motors (GM) whose value has gone up through its deal with U.S. rising EV star Nicola to turn out trucks on EV batteries jointly developed with the Korean firm.

The American multinational automaker GM announced on Tuesday that it acquired an 11 percent stake in Nikola and will be working on the EV startup’s Badger electric pickup truck for market release in 2022.

GM will collaborate on designing and manufacturing Nikola Badger as well as provide its Ultium battery system, which the automaker has developed together with LG Chem. The Ultium battery system uses LG Chem’s NCMA (nickel-cobalt-manganese-aluminum) chemistry, which reduces the amount of cobalt. The new lithium-ion battery reportedly is comprised of 90 percent or more nickel and less than 5 percent cobalt, giving better mileage and energy efficiency at a lower cost.

이미지 확대
LG Chem together with GM is currently building a new battery making plant in Ohio, the U.S., which will produce Ultium battery packs. The construction of the plant is scheduled to be completed by 2022 at the earliest. The plant, in which LG Chem and GM have equal 50 percent stake ownership, will be capable of producing 30 gigawatt-hours (GWh) battery cells.

Determined to go all-out to take on the EV leader Tesla, GM in March vowed to spend more than $20 billion through 2025 on its next generation of all-electric and autonomous vehicles.

For LG Chem, its American partner’s strong commitment in EVs would provide stable demand for its EV batteries as well as chances to expand its foothold in the American market. Panasonic currently is a runaway leader in the U.S. EV battery market, as it is the main cell provider for Tesla, which dominates the U.S. EV market with over 70 percent share, as of the end of June this year, according to SNE Research data.

As part of efforts to expand its presence in the U.S., LG Chem recently signed an agreement with California-based EV startup Lucid Motors Inc. to supply battery cells.

The Korean EV battery maker became the world’s largest supplier of EV batteries in the first seven months of this year. Its market share reached 25.1 percent, based on the global EV battery usage, more than doubled from a year earlier.