이미지 확대
One out of 10 small business owners in South Korean opted to close businesses for good, while three out of five small business employers deliberated the option when the level 2.5 social distancing guidelines that forced night curfew and business suspensions was extended into the second week around Seoul.

According to a survey done by job portal operator Mediawill Networks on Thursday, 58.5 percent of 234 member employers said they have thought about closing down since the government strengthened the social distancing measures to level 2.5. The portion went up to 68.6 percent for businesses designated as high-risk facilities such as clubs, bars and internet cafes, compared with 52.6 percent for mid- to low-risk facility owners.

While 20.9 percent said they are making losses, just 10 percent of the respondents said their sales have maintained or improved. 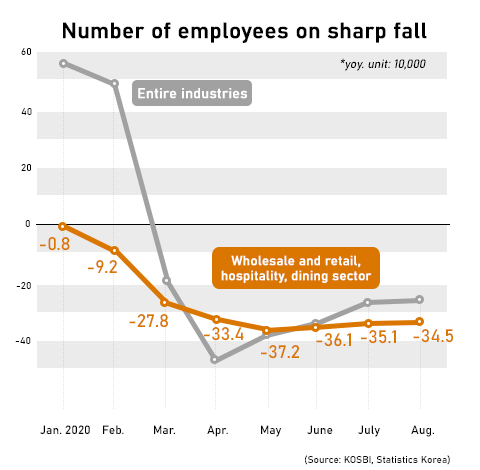 이미지 확대
Most of 67.5 percent said the number of customers has dropped when asked about changes amid the stricter social distancing restrictions. It was followed by job cuts at 40.6 percent, reducing operation hours 29.4 percent, temporary business suspension 25.2 percent, increased jobs of owners 15.3 percent, and increased to-go or delivery orders 11.1 percent including multiple answers.

More than half of 50.5 percent of shop owners who have let go of part time workers said they are willing to hire more workers if the situations get better, while 20 percent said they will not increase hiring for the time being.

A majority of 58.9 percent of the respondents said the social distancing measures don’t need to be strengthened to level 3, or full-scale lockdown, to prevent further economic fallout. But 44 percent said the measures should be tightened to the highest 3 level to stop the spread of the virus.

According to a separate survey by the Federation of Korean Industries released on Thursday, net profit of small businesses including restaurants, convenience stores and beauty salons is expected to plunge 42 percent in the second half of the year compared to a year earlier. Their sales and net income during the first six months of the year declined 27.2 percent and 32.9 percent on year, respectively, the FKI said.