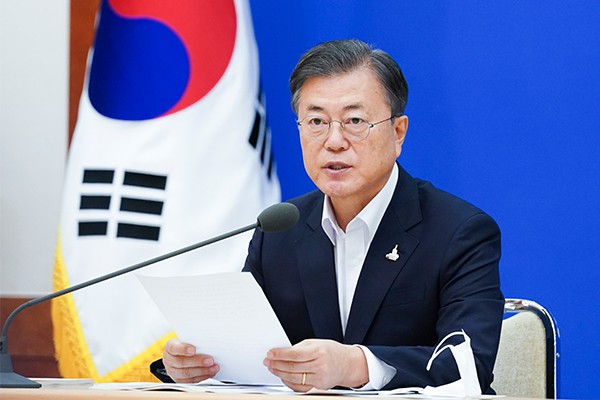 The South Korean government endorsed a fourth supplementary budget in the scale of 7.8 trillion won ($6.6 billion) to help out merchants and small businesses hard hit by weeks-long social restrictions from resurgence of virus and natural disasters.

The only time South Korea had stretched budgets so many times beyond annual spending scheme was in 1961.

President Moon Jae-in at the eighth emergency economic meeting held at presidential office Cheong Wa Dae on Thursday said the government will dole out relief funds to the unemployed and the most needy.

The new spending scheme will be submitted to the National Assembly for approval so that relief funds could be handed out before the Chuseok holidays, which starts on Sept. 30.

Moon said the government will spend 3.8 trillion won, or nearly half of the fourth supplementary budget on the socially weak of around 3.77 million people. Of the amount, 3.2 trillion won worth will be used to hand out maximum 2 million won to 2.91 million people.

The rest will be spent on unemployment coverage, additional supports to low-income families and child care. The government will subsidize 20,000 won in monthly mobile phone bills for everyone aged 13 or older.

After multiple increases in the deficit budget, the government debt stretched to 781 trillion won as of end of July, up 16.9 trillion won from the end of June.