이미지 확대
South Korea shed jobs for the sixth straight month in August, the longest losing streak since the global financial crisis, but the job situation is graver than headline data suggests with record number of people giving up on job search or idled from lengthening in the virus crisis.

The number of employed in August totaled 27.1 million, down 274,000 from a year earlier, according to the Statistics Korea on Wednesday. Payroll tally has been skidding since March to show the longest monthly losses since 2009 in the aftermath of global financial crisis.

The easing in the losses in August after plunging 476,000 in April, 392,000 in May, 352,000 in June and 277,000 in July should not be any comfort. The number is expected to spike back up in September as the country went under de facto lockdown with indoor and after-dark activities strictly restricted in August-September due to sprawling in the virus spread.

“The protracted COVID-19 crisis and the longest-ever rainy season weighed on the job market in August,,” said Jung Dong-wook from the Statistics Korea as he added the August numbers were compiled before the stricter social-distancing rules went to effect from mid-August. 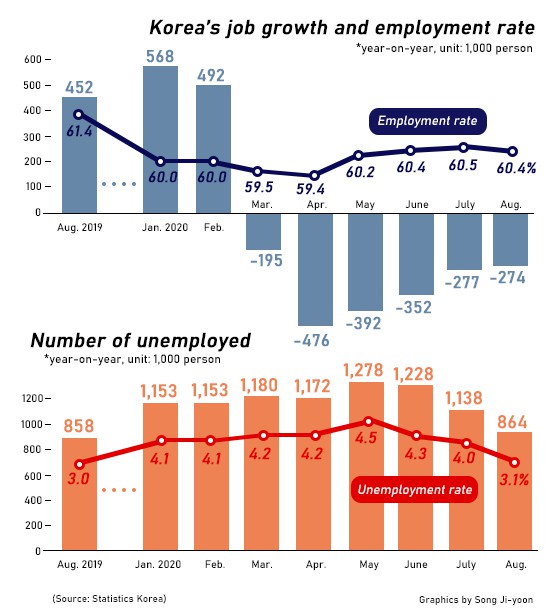 이미지 확대
The wholesale/retail industry lost the largest 176,000 jobs in August, followed by the accommodation/restaurant sector with 169,000 and the education service sector with 89,000. Decent-paying factory jobs also fell by 50,000.

Meanwhile, the healthcare and social welfare service sector as well as the public and social security administration sector added 160,000 jobs and 55,000 jobs, respectively, through public hiring. The transportation and logistics sector gained 56,000 jobs on ecommerce phenomenon under virus scare.

The pace of job losses in the accommodation/restaurant sector, the hardest hit industry by the COVID-19, slowed down in August from the previous month. But the wholesale/retail industry lost jobs at a faster rate compared to July.

Jobs were lost across all age groups, except for those aged 60 and older that gained by 384,000 under the state-sponsored program of senior hiring.

Economically active population came to 27.94 million in August, down 267,000 compared to a year earlier. It was the sixth straight month of declining.

Economically inactive population – those neither working nor actively seeking employment –gained 534,000 on year to 16.86 million, the highest for August since such record was available from 1999. Among the economically inactive population, total 2.46 million were not working despite having abilities to work, the largest for August since 2003 when such data began. The number of discouraged workers who have given up finding job increased by 139,000 to 682,000, also the highest August figure since the data tracking began in 2014.