The Federation of Korean Industries (FKI) said Monday that the country’s top 100 companies by sales in 2019 reported a combined 146.3 trillion won ($123.2 billion) in overseas revenue in the second quarter ended June this year, down 19.8 percent from the same period a year ago.

During the January to March period, their sales from overseas business edged up 0.65 percent year over year as COVID-19 had yet to spread beyond China and some Asian regions.

The electricity and electric business saw 5.1 percent in overseas revenue in the second quarter despite a growth in remote work and schooling amid the pandemic.

The auto and auto parts industry suffered a 36.5 percent revenue loss from the international market due to production halts of major automakers and sharp decline in global demand.

Global sales of the energy and chemical business declined 30.9 percent on the back of the weakening refining margin and falling crude prices.

The steel industry showed the steepest drop in overseas revenue by 80.1 percent, hurt by plunging demand for automotive steel sheets. 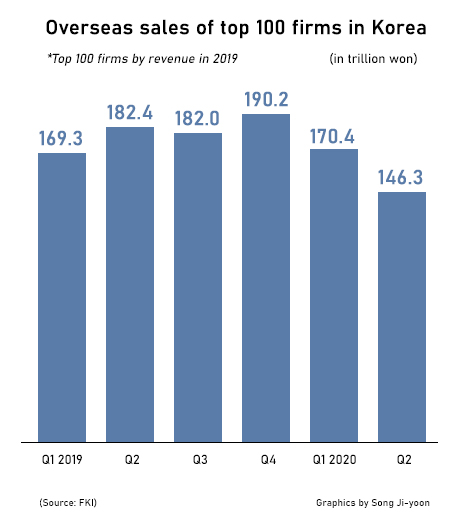 이미지 확대
China was the sole comfort in overseas front. Combined sales of Samsung Electronics, Hyundai Motor, LG Electronics, SK Hynix and Hyundai Mobis from the Chinese market rose 19.6 percent from the previous three months in the second quarter, as the Chinese economy rebounded sharply from the lowest point in February to March to record a 3.2 percent real growth rate during the April-June period. The sales gain was also driven by the country’s increased infrastructure investments such as 5G network, artificial intelligence and Internet of Things, the FKI said.

According to survey done by Federation of Middle Market Enterprises in Korea (FOMEK) on 120 mid-sized companies operating overseas subsidiaries, 68.3 percent said their overseas revenue declined in the first half compared with a year earlier. The average on-year drop stood at 12 percent.

Only 23 percent of the firms said their sales from the overseas market grew during the first six months from a year-ago period, compared with 45.8 percent in 2019.

One out of four mid-sized companies, or 24 percent said they have difficulties in raising funds, with 12 percent suffering from setbacks in taking out loans at local banks, 10 percent debt repayment pressure, 10 percent foreign exchange losses and 8 percent difficulties in getting additional loans.

If Korean banks launch a loan product allowing them to use overseas assets as collateral, almost half of 45.5 percent said they are willing to use the program. More than 40 percent respondents engaging in manufacturing business and 60 percent non-manufacturing firms showed positive response about the loan product.