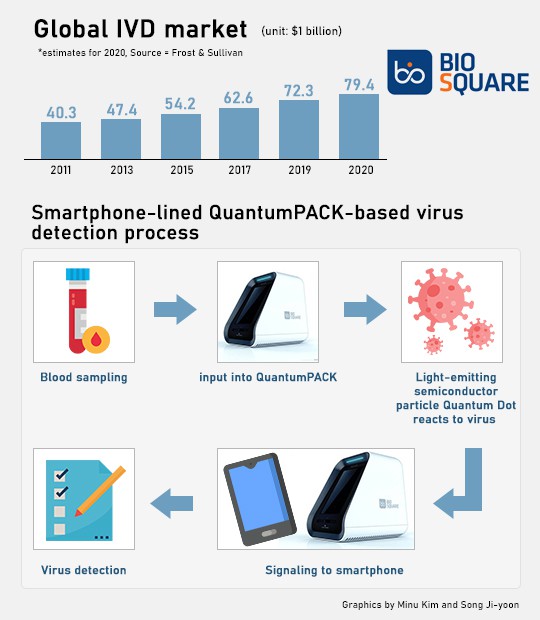 이미지 확대
Quantum-dot technology largely used for high-definition flexible TV panel is being explored for an in vitro diagnosis (IVD) to accurately identify infectious diseases, according to a CEO of the developer.

A device called QuantumPACK developed by BioSquare Inc. is a platform technology that combines QD with several IVD devices, said Yoon Sung-wook, the company’s chief executive in a recent interview with Maeil Business Newspaper. The device can realize sensitivity comparable to that of a molecular diagnostic testing technique PCR and perform multiple detections simultaneously.

There have been many studies to utilize QD applied to Samsung Electronics’ latest QLED TVs in the field of biology, but commercialization has been difficult due to technical challenges. QuantumPACK was able to be prototyped only after Professor Lee Yoon-sik, School of Chemical & Biological Engineering at Seoul National University, completed patent registration in 2016.

“Existing diagnostic devices that detect various infectious diseases including influenza have a limitation with a sensitivity range of 50-80 percent. QuantumPACK based on our QD light-emitting technology is far superior with a sensitivity of at least 80 percent,” Yoon said.

The company is focusing on commercializing the platform technology for the detection of endemic Leishmania, which is the second most prevalent after malaria, making it important to check the outbreak on site in an early time and receive prompt treatment.

Since QuantumPACK is a platform technology, it can be used in sync with a smartphone as well as existing test kits. After a small amount of blood from the subject is put into QuantumPACK, QD in the device emits light when it reacts to the presence of virus, and the result immediately appears on the smartphone screen, Yoon explained.

As QuantumPACK is a diagnostic platform capable of performing high-sensitivity, high-precision, and multiple diagnosis, it will be also used for COVID-19 testing, Yoon said, adding the company has already begun developing antigen and antibody testing devices.

From next year, the company will supply QuantumPACK products to airports and small and medium-sized hospitals that require emergency tests. A dedicated manufacturing site with GMP clearance will soon go into operation in Seongnam with an aim of full-fledged production of diagnostic reagents and equipment next year.

In recognition of the originality and excellence of its in vitro diagnostic technology, QuantumPACK was recently selected as a key project by the Right Fund, a global private-government partnership research fund established jointly by the Korean government, Bill & Melinda Gates Foundation and local life science companies in July 2018 to promote global public health. BioSquare was the only IVD project among the five project winners selected by the fund.

BioSquare attracted 4.5 billion won ($3.77 million) from Korean institutional investors including LSK Investment in the first half of this year alone.

Yoon had studied in vitro diagnostic technology for more than 20 years at LG Life Sciences and CJ Healthcare after completing a Ph.D. course in microbiology at Kyung Hee University. He founded BioSquare in 2017.