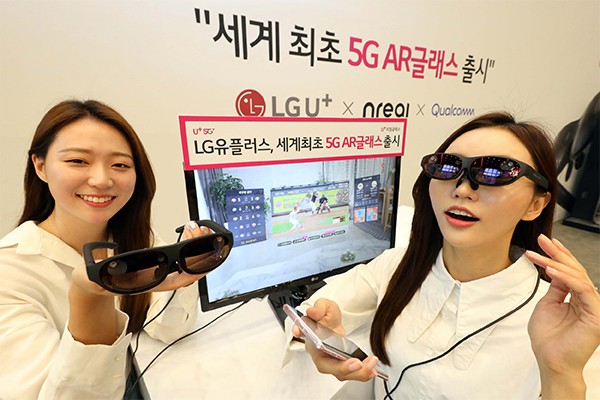 The company releases U+ Real Glass co-developed with Chinese mixed reality product maker Nreal on August 21. It is priced at 699,000 won ($588.88), much cheaper than existing AR glasses of other makers, and weighs 88 grams.

The world’s first 5G-based eye-wear will allow the user to enjoy AR contents and experiences when it is connected to a smartphone. Users can project a display of as big as 100-inch, simultaneously with multiple applications by using the smartphone as a remote controller.

Hand gesture option also is being developed to enable app operation on screen with no use of smartphones. In the second half, a teleconference system will be launched in cooperation with U.S. virtual reality workspace startup Spatial.

LG Uplus now is preparing to open the second AR Studio in Goyang, Gyeonggi Province, which will command a doubled space compared to the first studio in Seoul opened May last year.

With 60 cameras supporting 4K-resolution filming, the new studio will provide a stage to film AR contents for celebrities near the Sangam Digital Media City in Seoul, a media, entertainment and IT hub that houses major broadcasting companies, as well as a place for AR-related exhibitions and conferences, said an LG Uplus official.

LG Uplus currently offers a total of 2,200 AR contents, up 30 percent from late last year. The number is expected to rise to 3,000 by the end of the year, the largest among domestic providers, with the opening of the second studio.