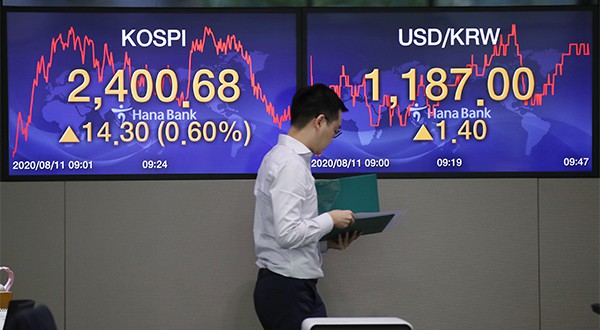 Brokerage houses are now betting the main Kospi to test the 2,500 level, given the unfazed retail zeal.

Others like Samsung Securities, Hana Financial Investment, and Shinhan Investment put theirs at the upper end of the Kospi band at 2,500 for this year.

The projection of around 2,500 is above the level local brokerages forecast last year or before the COVID-19 crisis broke out. The consensus on the upper end of the Kopsi band was between 2,250 and 2,500 at the end of last year.

The upgrade comes as retail buying stayed unfazed in the second half. Led by heated retail buying, Kospi gained third most this year among global markets.

In March, retail investors flocked to the local stock market after Korean shares became cheap from massive selloffs by foreign investors, gobbling up stocks worth 11 trillion won ($9.3 billion). Their buying spree continued on, with individual investors’ net stock purchase recording 3.81 trillion won in April, 3.78 trillion won in May, and 3.81 trillion won, as the Korean government`s expansionary fiscal and monetary policies to protect the economy against the COVID-19 fallout boosted liquidity in the market. Interest rates have been also placed at near zero.

Retail investors’ net purchase fell slightly to 2.24 trillion won in July and recovered to 2.3 trillion won during the first 10 days of August. 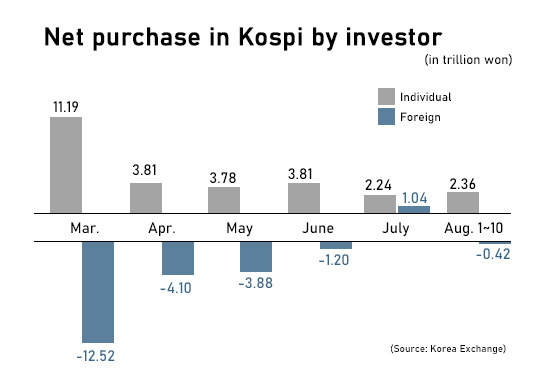 이미지 확대
According to data from Korea Securities Depository and local financial data provider Wisefn, combined deposits in brokerage accounts topped 48 trillion won last Friday, nearly doubled from 25 trillion won at the end of last year. Experts predicted the volume would even double the account amount, considering that the past history of brokerage account deposits expanded fivefold during IT bubble in 1999.

A report by Korea Investment & Securities showed narrowing yield gap to suggest investor penchant for risky assets. The yield gap is the different in the stock dividend yield and long-term government bond’s yield, telling whether equity is overpriced or underpriced compared to government bonds.

Some brokerages, however, remain more conservative toward the stock market’s buoyancy. NH Investment & Securities has kept its forecast for the Kospi unchanged at 2,300.

“The Kospi is predicted to be at the short-term peak,” said Lee Chang-mok, head of NH Investment & Securities research center, as he forecast a correction in stocks, considering the high number of variables from policy changes.